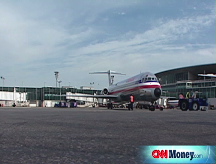 NEW YORK (CNNMoney.com) -- Americans turned to public transportation in the third quarter at their biggest jump in 25 years as gas prices hit record levels, according to a Monday report.

More than 2.8 billion trips were taken on public transportation nationwide from July to September, an increase of 6.5% compared with the same period last year, said the American Public Transportation Association.

During that time, on July 17, gas prices hit the all-time record high of $4.114 per gallon of unleaded, according to a nationwide average provided by the motorist group AAA.

This follows a surge in public transportation use in 2007, when Americans took 10.3 billion trips on commuter trains, buses, subways, trolleys and other types of transport.

After hitting their peak in July, gas prices declined for much of the remaining quarter, which ended on Sept. 30. The nationwide average for unleaded prices dropped to $3.90 per gallon on July 31 and down to $3.63 per gallon on Sept. 30, according to AAA spokesman Robert Sinclair.

William Millar, president of the APTA, said many of the commuters who had switched to public transportation because of high gas prices did not switch back during the price decline because they'd gotten used to leaving their cars at home.

Millar said he believes that Americans are continuing to use public transportation at increasingly rates in the fourth quarter, based on preliminary information his organization has gathered.

The association said that light rail use increased by 8.5% in the third quarter, the biggest increase among the different modes of transportation. The use of busses jumped 7.2% during that period, while commuter rail increased by 6.3% and heavy rail, which includes subways and elevated trains, grew by 5.2%.