A CNN poll shows that many people think fraud occurs often in financial institutions, and that more government oversight is needed to stop it.

Paste this link into your favorite RSS desktop reader
See all CNNMoney.com RSS FEEDS (close)
By David Goldman, CNNMoney.com staff writer
December 23, 2008: 6:03 AM ET
ROAD TO RESCUE
Madoff may have had help 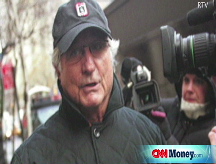 Madoff: Lifestyles of the rich and infamous
Bernard Madoff, the man behind an alleged $50 billion fraud, has a yacht named 'Bull,' owns several luxurious homes and may even have had two private planes on call.
View photos

NEW YORK (CNNMoney.com) -- Most Americans believe that investment fraud like the recently revealed Ponzi scheme run by Bernard Madoff happens regularly on Wall Street, according to a recent survey.

In a CNN/Opinion Research poll, 74% of those surveyed said they think Madoff's behavior is common among financial advisors and institutions. The Securities and Exchange Commission alleges that Madoff operated a $50 billion Ponzi scheme - the largest in history - that cost some of the world's largest financial firms, charitable foundations and individual investors hundreds of millions of dollars each.

Americans are more supportive of additional market regulation than they were just a few months ago. In an earlier poll conducted in September, only 50% of respondents said there was too little government oversight, while 26% said the government was regulating the markets too much.

Government regulation has been a hot political topic since the credit crisis began in mid-September. Many Democratic lawmakers have accused the Bush administration of allowing institutions and investors to operate with too little oversight, leading to irresponsible bets and illegal activity that spelled disaster for the markets.

Bush appointee Christopher Cox, the SEC's chairman, has been widely criticized for failing to act on information that could have prevented Madoff's scheme. Cox said last week at a Congressional hearing that "credible information" had been brought to the SEC's attention over a period of nearly 10 years about Madoff's activities, but no formal investigation was made.

Investor anxiety about the ongoing recession and shaky credit situation have caused extreme volatility in the financial markets this year. The S&P 500 index has lost 41% so far in 2008, and has fallen 30% since the credit crisis hit on Sept. 15.

As Americans search for a safe place to put their funds, the vast majority - almost three-quarters of those polled by CNN/Opinion Research - said they would rather place money in a bank or stuff it under the mattress than invest it in stocks or bonds.