Realtors: Sales of existing homes fall 8.6% - much worse than expected - as median prices suffer the worst decline since the Great Depression. 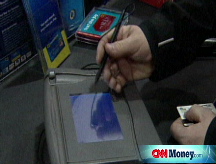 The National Association of Realtors said that home sales dropped to an annualized rate of 4.49 million units. That was down from 4.98 in October and much less than the 4.93 million units projected by a consensus of industry analysts as reported by Briefing.com.

"The only region where we're seeing more sales are where bargain hunters are taking advantage of distressed sale prices," said Lawrence Yun, the Realtors' chief economist. "About 45% of transactions, nationally, were of distressed properties."

Yun blamed the financial market turmoil for the devastating report. For months, sales had hovered 4.9 million to 5.1 million.

"Today's figure reflects the stock market crash that began in October," he said.

The drop took place despite bargain prices as property values continued their decline. The median existing home sold for $181,300 in November, down 13.2% from a year ago when the median was $208,800.

Yun said that price drop was the largest the association had ever recorded and probably the worst decline since the Great Depression.

Meanwhile, the glut of unsold homes expanded to 4.2 million in November. That represents 11.2 months of supply, at the current rate of sales, up from 10.2 months in October. Bloated inventories have barely budged over the past 12 months; last November there were 4.27 million existing homes on the market.

"At the risk of sounding like a broken record, November was another tough month for the housing market," said Mike Larson, a real estate analyst with Weiss Research. "It's not surprising considering what happened to credit markets this fall."

Existing home sales are now the weakest they have been since July 1997, and price drops have wiped out all the previous gains back to February 2004, Larson said.

Sales of new homes fared little better. They totaled 407,000 in November, according to estimates released jointly Tuesday by the U.S. Census Bureau and the Department of Housing and Urban Development. That was down 2.9% from 419,000 sold in October and 3.1% below Briefing.com's projection of 420,000.

Have you bought a house recently? If so, send your story and photos to realstories@cnnmoney.com. You could be featured in an upcoming article.