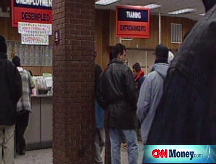 NEW YORK (CNNMoney.com) -- The U.S. dollar fell against its major trading partners Wednesday as investors digested a barrage of economic data ahead of the holiday.

The British pound remained weak against the dollar at $1.4752 from $1.4759. The pound fell sharply in the previous session after the U.K. government reported that the country's gross domestic product contracted by 0.6% in the third quarter.

"Markets are looking relatively quiet ahead of the holiday with the U.S. dollar generally weaker," said Steve Malyon, currency strategist at Scotia Capital in Toronto. He added that currency traders will be focused on economic data released earlier.

Trading is expected to be light with many market participants on vacation. U.S. stock markets will close early at 1 p.m. ET and remain shut on Thursday for the Christmas holiday.

Markets in Germany are closed Wednesday and Thursday. Most other European markets will also stop trading early Wednesday.

In addition to light participation, many investors have closed their books for the year and are not planning to make any large moves until 2009.

Still, the currency market will have to make sense of a flurry of economic data released early Wednesday.

In another sign of deterioration in the job market, the Department of Labor said the number of people filing initial unemployment insurance claims rose more than expected last week.

Meanwhile, new orders of durable manufactured goods fell for the fourth month in a row, according to the Census Bureau.

Still, the decline was not as sharp as expected. Economists had forecast goods orders to sink 3.1% after plummeting 6.2% in October - the biggest decline since 2006.

Separately, the Commerce Department said both personal income and spending decreased in November.

Personal income dipped 0.2% after a modest 0.3% increase in October. The reading was expected to be flat.

Personal spending fell 0.6% versus a decline of 1% the month before. But the figure was better than the 0.8% decline that economists were expecting.

Markets in Asia ended lower with the Hang Seng in Hong Kong falling 0.26%. Major indexes in Europe were lower near the close of trading.