A stock to stomach tough times

Analysts say Darden Restaurants has what it takes to see its way through a recession. 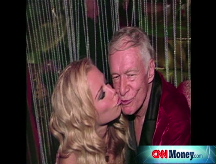 NEW YORK (Fortune) -- The restaurant industry is struggling mightily as the economy slumps further into recession, food costs rise and consumers tighten their grips on their wallets.

And it doesn't look like conditions are going to get better anytime soon.

"I've yet to see a more pessimistic backdrop for the industry than what we're seeing now," says Morgan Keegan analyst Robert Derrington, who has covered the sector since 1992 and operated restaurants for ten years before that.

As the stock market spiraled lower in 2008, Darden was among the few Fortune 500 companies to post a gain, finishing up 4.5% after a seesaw year, thanks in large part to a strong December rally when the stock more than doubled off a November low near $13.

By comparison, the S&P 500 lost 38% and the Dow Jones U.S. Restaurants & Bars index, which includes Darden, McDonald's, Ruby Tuesday and nine other leading companies, slipped about 12% in 2008.

After years of expansion and development, the restaurant industry is in danger of overbuilding, especially within the casual dining segment, which includes sit-down restaurants such as Applebee's (DIN), Chili's (EAT),Ruby Tuesday (RT) and Olive Garden.

That has left too many eateries angling for consumers who are cutting back on spending and eating out less. "You've got an industry that is really ripe for consolidation, especially within the casual-dining segment," says Derrington.

The parent company of rivals Bennigan's and Steak & Ale chains filed for bankruptcy protection in July, and Darden itself has made some cuts, most notably by selling off barbecue chain Smokey Bones in late 2007.

Still, the company's flagship brands, Olive Garden and Red Lobster, have held up fairly well as the company has focused on keeping costs down. Darden added to its roster of brands with the 2007 purchase of RARE Hospitality, the parent company of LongHorn Steakhouse, but analysts expect the company to now focus on growing its own business rather than shopping for other chains.

In December, Darden posted a fiscal second-quarter profit that jumped 37% year over year, but same-restaurant sales, or sales at locations open more than a year, fell 0.2% compared with a drop of 5.3% for the rest of the casual-dining industry, according to restaurant industry tracking service Knapp-Track.

Darden chairman and chief executive Clarence Otis lowered projections for fiscal 2009 and told analysts that the company expects earnings per share to fall as much as 10% and same-restaurant sales to decline as much as 2.25%. Even so, the company says it will open about 70 new restaurants, and it projects overall sales growth between 8% and 9% for the fiscal year (which includes an extra week compared with fiscal 2008).

If the short-term picture looks difficult, many analysts believe Darden - with more than 1700 restaurants and about 180,000 employees overall - has the size, brand power and marketing muscle to emerge from the recession in an even stronger position.

"We believe Darden appears best positioned among its peers to weather the difficult operating environment," Derrington wrote in a report late last month.

Olive Garden, with its reputation for value, continues to fare well. The chain racked up second-quarter sales of $761 million, 6.2% higher than the prior year, helped by 42 more restaurants than the year before and same-restaurant sales growth of about 1%. The chain also boasts nearly $5 million in annual sales per restaurant, compared with about $2 million for many competing casual-dining outlets, according to analysts.

Olive Garden has posted 57 straight quarters of same-restaurant sales growth, and analysts like John Owens of Morningstar believe the chain still has room to grow. With a loyal customer base and appealing economics for each restaurant, Darden could eventually boost the number of Olive Garden restaurants from 670 to around 900.

The company added another potential source of long-term growth in late 2007, when it acquired RARE Hospitality. Darden's purchasing power, brand management and proven operating expertise could help as the company expands the LongHorn brand nationally and takes on the likes of Outback Steakhouse and Texas Roadhouse.

The forecast for the coming months may be murky, as the struggling economy casts doubt over the prospects for a rebound in consumer spending. "The biggest risk with Darden is that this recession lasts longer and/or is more severe than we expect," says Morningstar's Owens.

But the long-term opportunities for Darden's restaurants are encouraging, especially because analysts believe that spending on casual dining could see a sustained boost as baby boomers hit their peak spending and retirement years.

Meanwhile Darden stock still looks cheap by historical measures, even after its recent surge. Shares trade for around 11 times calendar 2008 earnings, compared with a historical multiple closer to 16.

"The market's still too pessimistic on the company, which I think has really good long-term growth prospects," says Owens, who estimates the fair value of Darden stock as $52. "I have no idea what the stock will do over the next 12 months or so. It could revisit those lows again," he said, "but it's my belief that five to ten years from now, people that invest in Darden today will do very well."

2008 stock picks: How low can they go?
Related Articles