In troubled times a business needs enduring values, the best talent and an ability to 'zoom out' and see past the chaos in front of it. 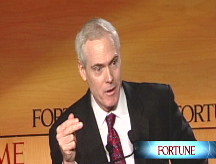 NEW YORK (Fortune) -- As the author of such business classics as "Built to Last" and "Good to Great," management guru Jim Collins has made a career out of understanding why companies succeed. Yet for the past several years he's been deep at work with partner Morten Hansen on how companies manage to negotiate through turbulent times. It was a prescient choice, deeply relevant to today's environment, and a likely topic of a future book. Collins recently sat down with Fortune senior writer Jennifer Reingold to share some of what he's learned to far. Excerpts:

We haven't seen much of you in a while. What have you been up to?

I've been deep in my cave, studying things. We wanted to understand what distinguishes those who prevail when the world goes out of your control. It's a great human question: it's not a business question. All of us are walking around with a little thing inside our stomachs that says, "I don't feel very good in all of this." That's more or less the new normal.

Our ongoing research is about turbulence. It came out of 9/11 and the dot-com crash, with all these entrepreneurial companies saying we're running out of capital. "Jim, we're gonna die on the mountain," they told me. Morten and I said let's specifically study that and find the companies that were vulnerable and then went on to attain greatness. We've studied them from IPO on. And it's relevant because it turns out that 1952 to 2000 was an aberration. We had a combination of tremendous stability brought on by two monolithic superpowers - danger, yes, but stability, combined with unprecedented prosperity. Very rarely in human history - maybe the Egyptian empire or 200 A.D. in Rome - only a few times you can go back and find those. So my own view is that the possibility of seeing this again in our lifetimes is very, very low. What we're experiencing now, get used to it! It's life, and it's the normal life.

Is it correct to call what is happening right now "unprecedented"?

I started my research 20 years ago, and our approach has always had a couple of key components. One is the contrast approach. Why do some companies do well and others not, when you control for circumstances? The other is history. We have this very arrogant view that we're the first people to experience change; we're the first people to experience volatility and uncertainty. But when you look over history there have been other difficult times. However difficult this is, it isn't likely to be even more difficult than 1932. If you go back and look at "Built to Last" [published in 1994], 15 of the 18 companies in it had lived through the Depression, and all of the 18 are standalone companies today.

So what did they do to get through the tough times?

A couple of things really jump out. No. 1, in times of great duress, tumult, and uncertainty, you have to have moorings. Companies like P&G (PG, Fortune 500), GE (GE, Fortune 500), J&J (JNJ, Fortune 500), and IBM (IBM, Fortune 500) had an incredible fabric of values, of underlying ideals or principles that explained why it was important that they existed. One of the things that was very distinctive about P&G, for example, was that they said a customer will always be able to depend on the fact that a product is what we say it is - we will always build our reputation on quality. When they were under pressure to start cutting corners or use cheaper ingredients, they just didn't do that. What we have found is that what really matters is that you actually have core values - not what they are. The more challenged you are, the more you have to have your values. You need to preserve them consistently over time.

The other thing worth mentioning is that these companies, when they went through the Depression, really understood that it was the caliber of their people that would get them through. If there's a storm on the mountain, more important than the plan are the people you have with you. When I did my El Capitan climb for my 50th birthday [on Yosemite's 3,300-foot rock face], my partner was Tommy Caldwell, who happens to be the greatest climber in the world. My hedge against the scariness of this climb was Tommy.

If you go back in history, a few companies used difficult times to bolster their legions of talent. After World War II, all the government labs were shutting down, and engineers were streaming out. Hewlett-Packard was actually going through a layoff. But at the same time, Bill Hewlett and Dave Packard said the greatest opportunity they ever got wasn't technology; it was the opportunity to hire those engineers.

But in a time of no credit and slowing demand, how does a company afford to bring people in?

[Hewlett-Packard's] answer was, How can we afford not to do it? You have to make the wherewithal. If you do not find a way to get those great people, you're not thinking long term enough. In the long-term research into tumultuous environments that Morten and I are doing, we find that great companies manage for the quarter-century.

If you talk to firefighters about the dangers of firefighting, they say that under duress there's a tendency to zoom in on the specific square area in front of you. We zoom in - go to the micro. But [some people] have the ability to do the opposite, to get above the fire, zoom out, and look at this with a whole different lens.

At Boeing, after World War II, Boeing lost more than 90% of its revenue. You can't do much worse than that. But Boeing's Bill Allen zoomed out. He used it as a chance to say, "We can choose." He started taking the military technology and systematically applying the know-how to building the 707. He transferred that knowledge to prototyping and invested a large portion of Boeing's remaining net worth in commercial aircraft. Everyone thought he was crazy. But there was also a certain energy from that, the sense that they were all creating something together. Allen used a 20-year lens and said this would be the time to get into the Jet Age.

How do you distinguish the truly great talent from the rest?

The right people don't need to be managed. The moment you feel the need to tightly manage someone, you've made a hiring mistake.

The right people don't think they have a job: They have responsibilities. If I'm a climber, my job is not [just] to belay. My responsibility is that if we get in trouble, I don't let my partner down.

Given our past prosperity, most executives today have never experienced a crisis like this one. Can they learn to adapt?

One of the big lessons we've learned is that turbulence is your friend. If you were disciplined and prepared before the storm came, you should be thankful for those times. Take Southwest Airlines. Think about the turbulence it has already experienced - interest rate changes, deregulation of the airline industry, fuel shocks, 9/11 - and still Southwest has learned how to be stronger than others. Southwest was once a startup company with cash-flow problems. Their famous 20-minute turnaround time came about because of cash constraints. They had fewer planes, but they could get them back in the air quicker. They used adversity to invent a discipline that they never lost.

And Southwest is the best-performing stock between 1972 and 2002, which includes 9/11. It has always managed itself in good times as if they were bad times. They had the discipline to grow slowly; 88 cities were clamoring for them to come, and they would open four. If you're managing for the quarter-century, you only open four so that when the bad times come, you're ferocious.

Right now, it seems as if people are panicking - or are paralyzed about decisions.

Almost across the board, people are worried. As a rock climber, the one thing you learn is that those who panic, die on the mountain. You don't just sit on the mountain. You either go up or go down, but don't just sit and wait to get clobbered. If you go down and survive, you can come back another day. You have to ask the question, What can we do not just to survive but to turn this into a defining point in history?

Look at World War II, with the story of Churchill's 25 Royal Air Force squadrons. France was losing, and Churchill wanted to fight on, so he asked how many squadrons of Spitfires Britain needed to ensure its survival. The military said 25. So he set them aside. We need to set aside our 25 squadrons today, just as Intel got an equity investment from IBM in the mid-1980s when the semiconductor industry was in crisis. Churchill wasn't putting aside the 25 squadrons so he could sit still; he was doing it so that he could fight on. His goal was not to survive; it was to prevail.

I don't care how hard this period is. You have to have the combination of believing that you will prevail, that you will get out of this, but also not be the Pollyanna who ignores the brutal facts. You have to say that we will be in this for a long time and we will turn this into a defining event, a big catalyst to make ourselves a much stronger enterprise. Our characters are being forged in a burning, searing crucible.