Zappos knows how to kick it

The quirky retailer has a reputation for flat-out fun. But when it cut 8% of its staff, Zappos became a model of how to nurture employees in good times and bad. 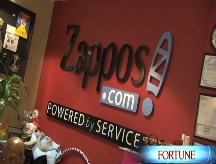 NEW YORK (Fortune) -- Five things you can learn from the obsessively Twittering chief executive of Zappos: 1. No matter the season, eggnog never works as an acceptable substitute for gravy when nuking mashed potatoes. He's tried. 2. Everything you need to know about business can be gleaned from playing poker - act strong when weak and know when to bluff. 3. Despite the crippling economic downturn, sales jumped almost 20% in 2008, passing the $1 billion mark two years ahead of schedule. 4. Pajama party at the boss's house! 5. The time has come for him to lay off 124 of his friends.

Welcome to Zappos, the Las Vegas-based e-commerce site with 1,500 perpetually chipper employees who have a thing for parades and a CEO intent on broadcasting all aspects of life, business, and philosophy in 140 characters or less.

The company's debut at No. 23 makes it the highest-ranking newcomer on the list of the Best Companies to Work For. For nearly ten years the online retailer has sold shoes and, increasingly, apparel and electronics to fawning customers who love the policy of free shipping in both directions. Zappos is also adored by employees, providing a model of how to manicure culture and treat staffers like adults, while simultaneously reassuring them that sometimes it's okay to behave like children.

Unfortunately Zappos is a leader in another aspect as well. Like many companies on our list, including Adobe, (ADBE) eBay, and Goldman Sachs (GS, Fortune 500), Zappos has been smacked by the slowdown and has had to lay off employees this year. The downturn has forced the company to show that it can be great in times of contraction as well as growth. The leader of the Zapponians, Tony Hsieh (pronounced shay), is both the original investor and the architect of the company's offbeat culture (the privately held company is funded by Hsieh, who owns "less than half" of it, and by Sequoia Capital).

Zappos is Hsieh's second tour as an entrepreneur; when he was 24 he sold his first company, the ad network LinkExchange, to Microsoft (MSFT, Fortune 500) for $265 million. He unloaded his brain child because he couldn't stand it anymore. "When it was just five or ten people, it was a lot of fun. We were working around the clock, no idea what day of the week it was, sleeping under our desks," says the soft-spoken 35-year-old bachelor, giving his keyboard a rare break for a few sit-down interviews. "We hired all the right people in terms of skill sets, but by the time it was 100 or so, I dreaded going to the office."

Zappos was founded in San Francisco in 1999; Hsieh joined the company within a year as co-CEO. He eventually took the reins, moved the operation to Las Vegas for the cheap real estate and abundant call-center workers, and vowed to avoid a LinkExchange-style fate. Looking back, he realized what happened: In boom times it's easy to make ad hoc decisions that feel right because they assuage short-term pressures. But that's the equivalent of driving without a map. "One of the biggest enemies to culture is hyper-growth. You're trying to fill seats with warm bodies, and you end up making compromises," says Hsieh.

Inspirational leaders tend to be larger-than-life personalities, but that's not true of Hsieh. He's probably the least bubbly, most reticent person in any room, especially at Zappos. (With a $36,000 annual salary, he's also one of the least well paid.) But with a computer science degree from Harvard, Hsieh knows how to write code, and he decided to try a similarly algorithmic approach to creating culture.

He devised a Ten Commandments-type list that includes such tenets as "Be humble," "Create fun and a little weirdness," and "Build open and honest relationships with communication." From that moment, those core values have driven all key decisions - in Vegas and at the distribution facilities in Kentucky - from hiring to customer relations to, most recently, downsizing.

The first core value, "Deliver WOW through service," is obvious if you've ever ordered from Zappos. Hsieh never outsourced his call center because he considers the function too important to be sent to India.

Job one for these front-liners is to delight callers. Unlike most inbound telemarketers, they don't work from a script. They're trained to encourage callers to order more than one size or color, because shipping is free in both directions, and to refer shoppers to competitors when a product is out of stock.

Most important, though, they're implored to use their imaginations. Which means that a customer having a tough day might find flowers on the stoop the next morning. I listened to one Minnesota customer complain that her boots had begun leaking after almost a year of use. Not only did the rep send out a new pair - in spite of a policy that only unworn shoes are returnable - but she also told the customer to keep the old ones, and mailed a hand-written thank-you.

The bean counters fully support such gestures: "Seventy-five percent of our purchases are from repeat customers," says Zappos chairman, COO, and CFO Alfred Lin. "There are a lot of things we do that seem overly costly. But we have always been focused on the long term when looking at whether something should be cut."