More Americans like Alan Moniz, in manufacturing for 31 years, are studying for new careers. Says Moniz, now entering health care, 'It takes a lot of work.' 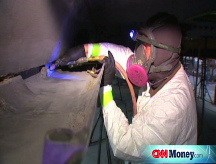 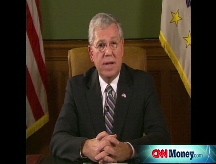 PROVIDENCE, R.I. (CNNMoney.com) -- Landing a new job in this withering economy may require a stop in school first.

As work in many industries dries up, a growing number of Americans are retraining for new fields in hopes of securing employment. This is certainly true for the jobless in Rhode Island, where unemployment is at 10%, the highest rate in more than 30 years and the second highest in the nation.

Take Virginia Platt of Pawtucket. After 35 years in manufacturing - the last 13 as a packing supervisor at a jewelry and souvenir company - Platt lost her job last February. She looked for seven months for work in her industry to no avail.

Realizing she needed to change careers, the 53-year-old signed up in late November for retraining at her nearby state-run employment center, netWORKri, in the customer service and call center fields. The four-week certificate courses, paid for with funds from the federal Workforce Investment Act, taught her how to use a computer, take calls and resolve complaints.

"I don't think I could get another job without retraining," said Platt. "My job was in manufacturing and there just aren't any manufacturing positions around."

As the national unemployment rate soars, retraining is becoming increasingly popular. As part of the House stimulus package, the federal government would send the states an additional $1 billion to provide training and re-employment services to 270,000 dislocated workers.

But retraining is not a panacea. Many jobless fear they won't find good positions after their classes end and they'll be back at square one.

The number of Rhode Islanders in retraining courses covered by the Workforce Investment Act has quadrupled over the past year. Those training for new careers under the federal Trade Adjustment Act - a more generous program aimed at Americans whose jobs were outsourced overseas - has increased fourfold at the Pawtucket center alone.

Meanwhile, the Community College of Rhode Island saw the most students come through its doors during the fall semester since the economic downturn of the early 1990s. The college increased the number of courses approved for Workforce Investment Act funding to 34 in 2008, up from five a year earlier, according to Robin Smith, dean of the Center for Workforce and Community Education.

While some people choose to train for professions that build upon the skills they already have, others make radical career changes.

When Alan Moniz lost his job as a maintenance supervisor at Revere Copper Products in August 2007, he saw it as a chance to switch to a more meaningful line of work. Moniz, who had worked at Revere for 31 years, figured he'd have to change fields since he couldn't find a comparable position in his old line of work. And after successfully battling cancer twice, he wanted to do more to help others.

So Moniz, 58, signed up for an occupational therapy program at New England Institute of Technology in Warwick under the Trade Adjustment Act. A Dartmouth, Mass., resident, Moniz graduates in June and will be licensed to work in both Rhode Island and Massachusetts. He's hopeful he'll land a job since his classmates who graduated in December are all employed.

At first he was scared to go back to school and start from scratch in a new profession. But after several sleepless nights, he realized he had few other options. A former co-worker making the same switch convinced him to enroll.

For others, losing a job motivates them to shift to a career that really excites them.

Amy Chabot, 32, knew she wouldn't spend her life as a massage therapist. While she always loved traveling, the Cranston resident didn't decide to really pursue her dream of becoming a travel agent until the spa where she worked closed last July.

Chabot is now studying for her travel and tourism certificate at the Community College of Rhode Island. Her husband, who works in sales, is supporting the couple.

"If I hadn't lost my job, I wouldn't go to school full-time," said Chabot, an avid travel-magazine reader who loves to give tips to vacationing friends and family. "I would have procrastinated. It was the push I needed."

Some people, however, worry that they'll wind up in the same place even after retraining - without a good job.

And even if they find work, starting over in a new career can often mean entry-level positions with lower salaries and less-desirable shifts. This is especially true for those in manufacturing, many of whom pulled in more than $25 an hour with just a high-school diploma.

Michael Dery, a tool- and die-maker for 27 years who lost his job last month, has started doing his homework even before he chooses a new profession. So far, he's explored the marine industry, though he's concerned about job security and pay. He is also looking at building trades, including construction and plumbing, figuring those workers will be in demand when the housing market bounces back.

Eligible for more than $19,000 in retraining funds, Dery wants to make sure he picks a field where he won't fear for his job and can eventually earn close to the $63,000 he was making.

"My next career choice is going to have to be something I retire on," said Dery, 45, a North Providence resident.

Retraining is not something to enter into lightly, said Marie DeRoche, manager of Pawtucket's netWORKri center. Job seekers should work with counselors to determine which fields best meet their needs.

Many are initially resistant to the idea, worried about switching careers or spending time in school rather than on the job hunt. DeRoche explains the benefits of retraining. For instance, she said, potential employers like to see applicants motivated to expand their skills.

Also, what else are people going to do if there is no future in their fields, she asked.

"Do you want to do training while you are unemployed or do you want to just sit there and hope a job comes along?" DeRoche said. "You might as well use this time wisely."

Wednesday: "Recession realities: Stories from the frontline" continues - Rhode Islanders in their own words.