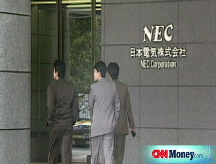 NEW YORK (CNNMoney.com) -- In a brutal week for the job market, an assortment of companies across various industries announced more than 100,000 job cuts.

The bulk of the job loss news occurred on Monday, when several major U.S. companies announced sweeping job cuts, pushing the day's total to more than 70,000.

"The picture is still pretty glum out there," said David Wyss, chief economist for Standard & Poor's, noting that January is often a bad month for the job market, because companies want to include the reductions in their annual tax returns.

Pfizer (PFE, Fortune 500), the leading drugmaker in terms of annual pharma sales, and Caterpillar (CAT, Fortune 500), a heavy equipment manufacturer based in Peoria, Ill., each said they would cut 20,000 jobs. These are the biggest reported eliminations among U.S.-based companies.

New York-based Pfizer said the cost-saving restructuring would occur before and after its merger with Wyeth (WYE, Fortune 500), to be completed later this year.

Boeing (BA, Fortune 500) announced its massive layoffs on Wednesday. The Chicago-based airplane manufacturer said 10,000 workers, including 4,500 previously announced reductions, would lose their jobs. The company blamed this on dwindling demand for its aircraft.

Chico's (CHS), a retailer of women's clothing based in Fort Myers, Fla., said on Friday that it was cutting 180 positions. The retail industry has been hard-hit in recent months by a slow-down in consumer spending, partly because so many people have lost their jobs.

Also on Friday, the newspaper publisher A.H. Belo (AHC) said it was cutting 500 jobs. Chief Executive Robert Decherd, in a letter to colleagues, blamed the "rapid deterioration in the U.S. economy."

The U.S. economy lost 2.6 million jobs in 2008, according to government reports. This includes 21,137 mass layoffs, a seven-year high. In a mass layoff, 50 or more workers are laid off at a time.

The job market isn't expected to get any better any time soon. The Conference Board forecast two million job losses for 2009.

"[The job losses] are going to continue until sales stabilize and that might not become apparent until the summer," said Moody's chief economist John Lonski. "There's every reason to believe that the magnitude of job destruction will rise yet again in February and March."

Not everyone agrees that job losses will continue at their current pace. Robert Brusca, chief economist at Fact and Opinion Economics, said that "when the pace of the loss is this severe, the period of severity isn't very long." He said companies might be overzealous in reporting their eliminations, lessening the need for further cuts down the road.

While opinions differ about the severity of cuts, nobody's talking about job growth for the foreseeable future.

"There's no reason to anticipate a hiring frenzy any time soon," said Rich Yamarone, director of economic research at Argus Research, in an email to CNNMoney.com. "Labor usually accounts for about 75% of a company's costs, and if the outlook remains bleak, they slash jobs. There is no reason to believe this trend will stop any time soon."

The worse year for jobs since 1945

Your piece of the $819 billion stimulus