Tracking the bear: How bad could it get?

Major indexes have tumbled to 12-year lows, only to rally right back. Experts weigh in on what to expect next. 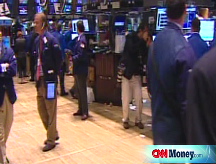 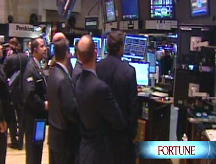 NEW YORK (Fortune) -- Don't let Tuesday's rally fool you. While the Dow roared back more than 236 points and the S&P 500 gained 4%, Monday's 12-year lows showed that this bear market may still grow bigger and meaner.

To start the week, both the S&P 500 (SPX) and the Dow Jones industrial average (DJIA) slipped past their November troughs to close at their worst levels since 1997. The Dow's 49.8% drop from its October 2007 peak marked the index's second-sharpest decline since 1901, according to Ned Davis Research. The only steeper drop occurred in the 1930s, during the 813-day free fall that ended with an 86% loss.

Now comes the question: Have we hit the bottom, or will we resume our downward slide?

To make sense of this bear, we sought out some of the smartest market watchers we know and asked them to interpret the signs.

The bottoming out process. First things first. As Charles Schwab Investment Management CIO Jeff Mortimer points out, bear markets rarely hit their low points only once before turning around. More commonly, they go through a "bottoming process" -- a months-long period during which the market retreats to recent lows multiple times.

"The double-bottom we're seeing here is still a natural occurrence, as long as it holds," says Mortimer. "We're in that range on the Dow where we want to see if the buyers who came in last time will step in again at this valuation, or have things changed to [whether] they no longer find it attractive."

And the fact that the Dow sank below 7,200 on Monday doesn't necessarily mean the whole market broke the bottom, says BlackRock vice chairman Bob Doll. For one, he says the 30-stock index is simply too narrow to serve as a market proxy.

Doll prefers to look at broader indexes like the S&P 500 and the Value Line Arithmetic Index. The S&P 500 ended Monday at 743, several points below its November low (On an intraday basis, the S&P 500 hasn't dipped below its Nov. 21 trading low of 741.) But Value Line, a broad equal-weighted index, remained 9% above its November trough; as of Tuesday, it's up 15%.

Another positive indicator Doll says is the number of "new low" stocks -- shares that sink to their cheapest price of the year. That number has not exceeded last fall's levels. "That indicates to me that the average stock is slowly but surely working its way higher," he says.

Doll says the fact that 2009 started at the tail end of a late-year double-digit percentage rally has overshadowed those and other encouraging signs. "If the calendar ended in mid-November, we wouldn't be feeling so bad because stocks would still be up a little bit," he points out.

He expects that the November low could still hold -- though it might be tested several more times -- and predicts that the S&P 500 could end the year in the 1,000 to 1,050 range.

More bad news on the horizon? On the other end of the spectrum, one of the gloomier voices belongs to bear market investor Doug Noland, who shorts individual stocks and ETFs in his $1.1 billion Federated Prudent Bear fund. In his view, the recent credit bubble warped the economy to such an extent that current valuations are largely meaningless.

"Bubbles distort the nature of spending throughout the economy," says Noland. "People won't spend as much on luxury items, they won't consume as much. It's this change on spending patterns that has this big impact on companies and industries, so you can't value them on historic metrics."

Not only that, but Noland expects that many companies won't survive the current downturn. For one, he says, our services- and finance-fueled economy will need to return to a broader manufacturing base.

"This readjustment period is not going to be kind to a lot of companies that prospered during the boom. They're going to look cheap all the way down, and their earnings are just going to disappear," he says.

Meanwhile, GMO chairman Jeremy Grantham is more upbeat -- though he does expect more pain to precede any recovery.

Looking back at historic bear markets, Grantham draws comparisons to 1974 and 1982, when the S&P 500 lost roughly half its value. Since he estimates the current S&P 500 fair value at 900, Grantham puts his worst-case bottom at a hair-raising 450.

"That's fairly scary, but on the one hand we look at the massive stimulus, and then on the other we try to work out the fact that the global economy is in worse shape than it was in '74 or '82," says Grantham. "I'd say there are three-to-one odds that we go to a material new low. We should count on [the S&P 500] hitting 600 for a little while, and we should hope like mad it doesn't get deep into the 500s."

Patience rules. Another looming threat is that the market may enter an extended period of drops and rebounds that flatten long-term returns and strand buy-and-hold investors for decades.

Japan's stalled stock market is one recent example, but the U.S. has had its shares of quagmires, too. Grantham likes to point out that investors who bought at market crests in 1929 and 1965 had to wait 19 years each time just to break even.

Still, Grantham says buy-and-hold still makes sense for long-term investors when stocks are trading below fair value. He especially favors U.S. blue chips, and his fund is on a strict, slow schedule to invest as valuations dip even lower.

"If you don't have a schedule for investing, you will not do it," he says. "When the market goes down, it reinforces the hoarding of cash. By the bottom, you suffer what we called in 1974 terminal paralysis -- you cannot pull the trigger. Almost everyone who avoids the great pain is very slow to get back."

Schwab's Mortimer says that dollar-cost averaging -- or regularly investing fixed amounts, regardless of share price -- can be also be a good strategy in a falling or stagnant stock market. "You'll still get volatility, and with dollar-cost averaging you'll benefit by buying more at the lows, less on the highs. You just won't know it yet," he says.

Paying for the rescue: Get ready for higher rates