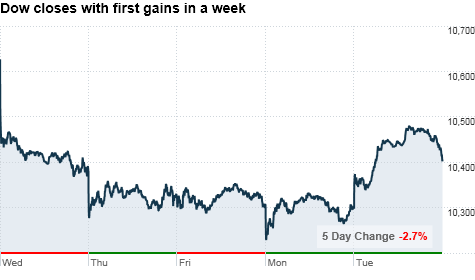 The gains followed a choppy trading day on Wall Street on Monday. The tech-heavy Nasdaq managed to advance, rising about 0.4%, while the Dow and S&P 500 ended little changed.

Investors started the week coming off four consecutive sessions of losses, following a bearish statement from the Federal Reserve a week ago.

And while the Fed's outlook about a slowing economic recovery is still weighing on investors' minds, their fears were calmed on Tuesday when Narayana Kocherlakota -- head of the Federal Reserve Bank of Minneapolis -- said those concerns about the central bank's statement are "unwarranted."

"My own interpretation is that the FOMC action led investors to believe that the economic situation in the United States was worse than they, the investors, had imagined. In my view, this reaction is unwarranted," Kocherlakota said in a speech Tuesday.

That statement helped propped markets up toward key psychological levels as the S&P 500 traded near 1,100 and the Dow looked to turned positive for the year in afternoon trading, said Dan Cook, senior market strategist with Chicago-based brokerage firm IG Markets. The Dow fell short of matching its 2009 close.

But he added, he doesn't the think "the game has changed."

"As far as the fundamentals and corporate earnings are concerned, I just don't get a warm, fuzzy feeling," he said. "I'm looking for choppy action for the foreseeable future, all the way into September."

Pactiv (PTV), the maker of Hefty trash bags, gained more than 5% after agreeing to be acquired by Reynolds Group Holdings, which is a subsidiary of a New Zealand firm, for $6 billion.

General Motors is expected to file for an initial public offering of stock with U.S. securities regulators as early as Tuesday.

Economy: A wave of economic reports, including data on housing and inflation, showed mixed results before the bell.

Both of these tallies were less than expected. Economists were looking for housing starts to rise to a seasonally adjusted annual rate of 555,000; building permits were expected to slip to a rate of 573,000.

The Producer Price Index, a measure of wholesale inflation, matched expectations by increasing 0.2% in July, after dropping 0.5% in June.

Currencies and commodities: The dollar fell against the euro, but rose versus the U.K. pound and the Japanese yen.

Oil futures for September delivery rose 53 cents to settle at $75.77 a barrel.

Bonds: Prices for Treasurys were lower. The yield on the 10-year note rose to 2.64%, coming off a 17-month low of 2.58% late Monday. Bond prices and yields move in opposite directions.