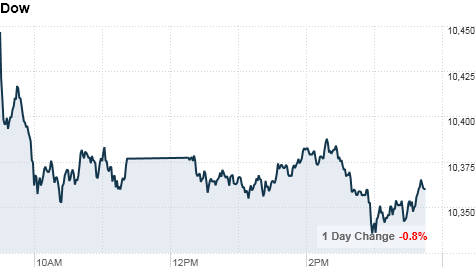 NEW YORK (CNNMoney.com) -- U.S. stocks fell Tuesday as renewed worries about European banks weighed on financial stocks and investors flocked to such safe-haven assets such as the dollar, Treasurys and gold.

During last week's stock rally, the Dow turned positive for the year. But Tuesday's losses quickly turned the index back into the red.

On Friday, the major indexes gained more than 1%, after a government report showed fewer jobs were lost in July than economists had expected. U.S. markets were closed Monday for Labor Day.

"We're in September, which is traditionally a softer month for stocks, and so far we've escaped that," said Peter Cardillo, chief market economist for Avalon Partners. "But lingering worries won't diminish until we get more indicators that show the decline in economic activity is leveling off and beginning to turn around again."

"Investors are questioning the shape of the banks, because reports are saying that their sovereign debt holdings are weaker than previously thought," he said. "People see this news coming out and begin to worry more about a possible double-dip [recession], because you can't have a healthy economy without healthy financials."

President Obama will introduce a new $200 billion tax cut on Wednesday that will allow businesses to write off all new investments in equipment made between now and the end of 2011.

A reading on hiring from employment firm Manpower showed that employers are likely to remain reluctant to boost hiring in the fourth quarter.

Is Mark Hurd really worth $6 billion to Oracle?

Companies: Shares of Oracle (ORCL, Fortune 500) gained 6% after the business software maker said it has hired former Hewlett-Packard (HPQ, Fortune 500) CEO Mark Hurd as its president. Later in the day, HP filed suit to block Hurd from the taking the job.

Signs of life in the job market