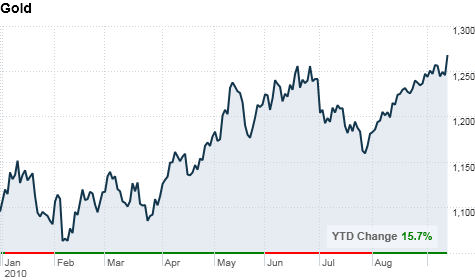 Click the chart to track the price of gold and other commodities. By Annalyn Censky, staff reporterSeptember 14, 2010: 3:22 PM ET

NEW YORK (CNNMoney.com) -- Gold surged to a new record high Tuesday, as uncertainties about the global economy sent some investors flocking to the save-haven precious metal.

Gold is often seen as the ultimate low-risk asset because it is tangible and unlike currencies, it isn't tied to any one country's policies.

A number of global headlines were fueling the flight to safety on Tuesday, said Phil Flynn, senior market analyst with PFG Best.

Investors are concerned about how banks will phase in the new regulations announced in Basel, Switzerland, over the weekend, he said.

They're also using gold as a hedge against the dollar, which fell to a fresh 15-year low against the yen Tuesday, after Japan's Prime Minister Naoto Kan won re-election. Investors have been looking for the Japanese government to jump in to limit the currency's rise, as a stronger yen can hurt profits at Japan's export businesses. Kan has resisted pressure to do so.

Adding further fuel to the fire, Flynn called out reports showing declines in gold production from Russia -- among the top producers in the world.

Gold rose to record highs earlier this year as fears about Europe's sovereign debt crisis escalated, and in late 2009, gold had surged when investors fretted about a weak dollar and inflation fears.

But while gold prices hit a record on Tuesday, they were still a far cry from their real peak, as measured in dollars adjusted for inflation.