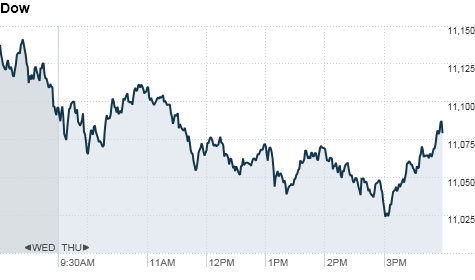 NEW YORK (CNNMoney.com) -- In an abrupt about-face, stocks closed with minor losses Thursday as investors shook off concerns about the banking sector to do some bargain hunting late in the day.

Bank stocks led the market lower in the morning as concerns about investigations into foreclosure proceedings by state regulators weighed on the sector.

But stocks regained most of the lost ground in the afternoon as buyers came back into the market to scoop up shares that had been beaten down earlier in the session, said Ryan Larson, a senior equity trader at RBC Global Asset Management.

"As the financials weighed on the market, things became cheap," he said.

After the closing bell, Google (GOOG, Fortune 500) reported quarterly profit and sales that rose from year-ago levels and beat Wall Street's forecasts. Shares of the web giant were up 9% after hours.

The reports were the latest in a slew of quarterly financial statements released this week from major U.S. companies. On Friday, the deluge will continue with General Electric (GE, Fortune 500) and Mattel (MAT, Fortune 500) due to report results before the market opens.

Larson said investors are looking for solid revenue growth and will pay close attention to what executives have to say about the outlook for next year.

"It has to be about sales, not cost cutting," he said. "And the revenue picture has been mixed so far."

The greenback has been under pressure this week, as investors anticipate another round of asset purchases from the Federal Reserve. That policy -- known as quantitative easing -- could push interest rates down and keep the dollar weak.

Fed policy will probably be in focus again Friday morning when Ben Bernanke, the central bank's chairman, makes a speech in Boston.

Also on Friday, investors will take in reports on consumer prices and retail sales, as well as consumer sentiment, business inventories and regional manufacturing activity.

Stocks rallied Wednesday, amid speculation that the central bank will announce plans to do more quantitative easing at its next meeting in November.

Economy: Initial jobless claims rose to 462,000 in the latest week, from a revised 449,000 the week before, the Labor Department said.

Economists had expected initial claims to have risen to 450,000, according to consensus estimates from Briefing.com.

The government's latest reading on inflation at the manufacturing level rose 0.4% in September, matching the pace in August. Excluding volatile food and energy prices, core PPI rose 0.1%, also the same rate as the month before.

The U.S. trade balance widened to $46.3 billion in August from a revised $42.6 billion in July, the Commerce Department said.

The move ends AT&T's (T, Fortune 500) exclusive grip as the wireless carrier for Apple's wildly popular tablet, and potentially sets the stage for a broader partnership between Apple and Verizon.

Shares of Yahoo (YHOO, Fortune 500) gained 4.5%, after The Wall Street Journal reported AOL is considering teaming up with private-equity firms to make a bid for the search engine.

Commodities and Currencies: The dollar fell against major international currencies including the British pound, the Japanese yen and the euro.