How to keep your star employees 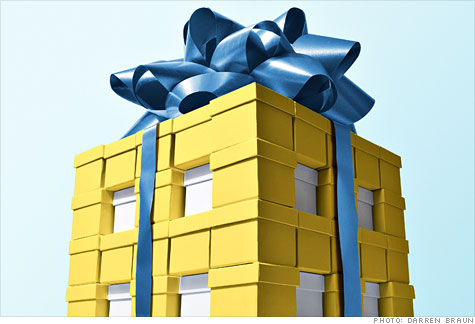 FORTUNE -- You doled out extra vacation days to make up for paltry bonuses to your top performers. After the 401(k) match was cut, you passed out gift cards to remind your stars how much they mattered. In a tough economy, it's the little things, right?

Wrong. Perks and trinkets are nice, but they won't keep your best people when things improve. Some 27% of employees deemed "high potential" said they plan to leave within the year, according to a recent survey by the Corporate Executive Board. That rate of dissatisfaction is rising "precipitously" as the economy stabilizes, says Jean Martin, executive director of the CEB's Corporate Leadership Council, up from just 10% in 2006 and increasing at twice the rate of the general employee population. 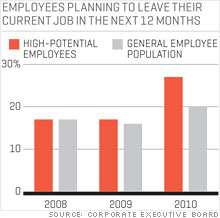 That's the bad news. The good news is that perks aren't the only way to keep your high performers engaged. They want a mix of recognition and challenges that stretch them without completely stressing them out. Liz Wiseman, a former Oracle executive and author of the bestseller Multipliers, says money "never came up" when she interviewed 75 Fortune 500 managers about the leaders who motivated them most.

Retention rules: How to keep your top employees

The CEB survey, which asked nearly 20,000 high-potential employees what drove them, found that feeling connected to corporate strategy was tops on their list. But many managers turned inward when the economy sank, giving fewer employees the chance to influence the company's direction.

Another way to get your stars involved is to turn them into headhunters. Many companies already do so through employee-referral programs, but they don't realize that there is an upside beyond bringing in new talent. Dave Ulrich, human resources consultant and University of Michigan professor, says such programs can actually boost loyalty for those doing the recruiting. "It sounds tautological," he says, "but when people behave as if they're committed, they become more committed."

Even if money isn't the best motivator, it still talks. To make a smaller bonus pool go further, fine-tune your timing. Rewards handed out at tough times can have a major impact. It's also smart to rethink your selection process. More companies are paying bonuses to those with hard-to-replace skills instead of just top performers, says Hay Group comp expert Tom McMullen.

Building a real future lies primarily in bigger opportunities. Yet so-called stretch assignments can be tricky; challenges meant to be energizing can feel like punishment for success if they aren't designed well. To avoid that fate, managers should make sure assignments give the employee more independence and are custom-tailored to their talents, says Tom Rath, head of workplace consulting for Gallup. If not, he says, "it can be perceived as piling on. And that's the quickest way to push that person toward the door."

Retention rules: How to keep your top employees

It's a good market for international talent