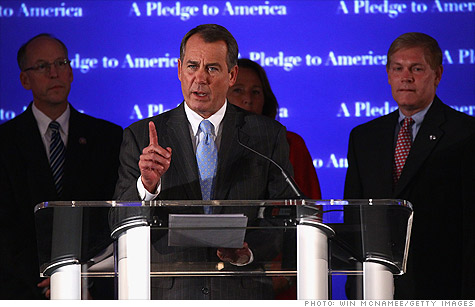 WASHINGTON (CNNMoney.com) -- "Repeal Obamacare!" might be the battle cry that swept Republicans into control of the House, but making good on the promise will be tough.

GOP candidates pledged that their first item of business would be repealing and replacing health care laws passed in March that would insure 30 million Americans without health care coverage.

Incoming House Speaker John Boehner promised on Wednesday to "do everything we can" to repeal the health care law.

"I believe the health care bill will kill jobs in America, ruin the best health care system in the world and bankrupt our country," he said during a Wednesday press conference.

But some Republicans are also quietly acknowledging that such a complete undo is unlikely given the political realities, chief among them President Obama's veto power.

Another complication is that some parts of health care reform already in effect are pretty popular. Among them are provisions forcing insurers to cover children with pre-existing conditions and allowing parents to keep kids up to age 26 on their policies.

That's why congressional veterans predict more of a piecemeal rollback than a full-scale discard.

That's not to say congressional Republicans won't try to replace the current law with their version of health care reform.

In the GOP version, the states would get the funding, power and responsibility of extending health coverage to some of the uninsured. Republicans would also allow people to carry insurance policies across state lines.

There would be no mandates or government-run insurance pools. The package would cap court awards for medical malpractice and help individuals sock more pretax dollars into savings accounts that can be used toward health care.

The Republican plan saves some money, cutting deficits by $68 billion over ten years. But it would only insure about 3 million people by 2019, leaving 52 million uninsured, reported Douglas Elmendorf, Congressional Budget Office director, in a 2009 analysis.

However, the GOP effort won't get far as long as President Obama can veto it.

"It would be a symbolic vote -- a vote of intention rather than reality," said Joseph Antos, a health care and retirement policy expert at the American Enterprise Institute, a conservative think tank.

Republicans can stall provisions of the law from going into effect by holding lots of high-profile hearings and launching new investigations.

"Every time there's some bad news about the law, they can hold hearings on it, and drag officials to Capitol Hill and read them the riot act," said Michael Cannon, director of health policy studies at the libertarian Cato Institute. "They can make the health care law even more unpopular than it already is."

Republicans on the campaign trail have also talked about "starving" health care reform by cutting funds.

But cutting the funding is tricky and will take a while, budget experts say. There are several agencies involved, and some might continue working on reform policies with existing dollars or by moving personnel around.

Complicating matters is the fact Congress doesn't have a current budget, but rather a stop-gap measure to keep integral agencies funded at past levels. Congress is likely to pass another continuing resolution to keep government running at such levels through the spring, Antos said.

So, funding cuts might not kick in until the spring; and some health care policy experts think it's even more likely that cuts would be delayed until the next budget that begins in October.

"It won't be an active starvation, but they could put HHS (Health and Human Services) on a diet," Antos said.

However, a diet could be enough to thwart the law, said Brookings Institution senior fellow Henry Aaron. Agencies need full funding to buy equipment, and to hire staff to enforce mandates and provide subsidies so that the mandates are affordable.

Short of full repeal, the GOP is expected to attack pieces of the law, starting with a requirement forcing small businesses to tell the Internal Revenue Service about purchases over $600, which Republicans have declared a "job-killing" mandate.

The idea is to ensure that income gets disclosed to help generate more tax dollars that pay the cost of the reforms. But small businesses say the new rule is burdensome.

Some Democrats agree and have offered to ease the reporting provision, but Republicans are out for total repeal.

Republicans and Democrats also might consider repealing provisions that target Medicare, creating more than $500 billion in "savings" over the next decade, Cato Institute's Cannon said. Those savings come from curbing the growth of Medicare costs and are key to holding down the price of extending health care to the uninsured.

Several experts suggested that another reform on the block could be the mandate requiring the uninsured to buy insurance. But President Obama is likely to veto such a move, and Republicans didn't win a large enough majority in the House to overturn it.