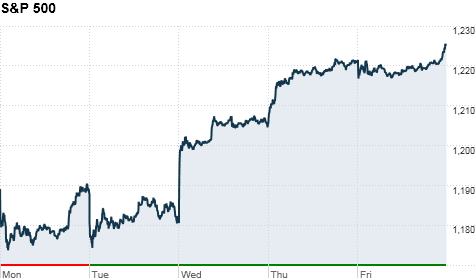 NEW YORK (CNNMoney.com) -- Stocks turned higher during the last hour of trade Friday, as investors moved beyond the report that showed U.S. job growth in November was much slower than expected. Instead, they focused on what favorable policy decisions might be triggered by the disappointing numbers.

Earlier in they day, stocks were lower as market's responded to the "surprisingly lousy jobs report," but even the negative reaction was "muted," said Timothy Ghriskey, chief investment officer at Solaris Asset Management.

"The market is looking beyond the current employment conditions and is looking forward to prospects of improvement," Ghriskey said. "The weakness in the labor market does justify the Fed's decision to keep buying more securities and keep interest rates low, and it gives Congress ammunitions to extend the Bush tax cuts."

"At today's valuations, dividend yields and corporate cash levels -- stocks are a bargain, and that continues to draw investors into the market," he said.

Investors have been buying up stocks and other risky assets this week, following a batch of mostly positive economic indicators.

All three major indexes ending more than 2% higher, with the S&P 500 gaining almost 3%. The broad index is just a point shy of the 2-year high it hit early November.

Stocks staged a big rally Thursday, as investors cheered strong retail sales figures and a pledge of support from the European Central Bank. Thursday's gains came on top of Wednesday's powerful rebound, which pushed the Dow near its highs for the year and lifted the S&P 500 above the key technical level of 1,200 points.

The total fell far short of expectations. An exclusive CNNMoney.com panel of economists had forecast a gain in payrolls of 150,000 jobs, with some even going as high as 200,000.

The unemployment rate rose to 9.8% after holding at 9.6% for several months.

Are jobs coming back? Signs point to yes

President Obama's fiscal commission convened to cast a final vote on the controversial plan to slash $4 trillion in federal debt. While the plan drew bipartisan support -- with 11 of 18 members voting yes -- the result still fell short of the 14 votes needed, in order for the commission to present its recommendations to Congress for a legislative vote.

A separate government report showed that factory orders fell in October, dropping 0.9%, for the first time in 4 months. The numbers followed a 3% gain in September. Economists were expecting orders to fall 1.3%.

The Institute for Supply Management's November index on manufacturing activity rose to 55.0, beating expectations. It was 54.3 the month prior.

Companies: Walter Energy (WLT) will buy Western Coal for $3.3 billion, the companies announced Friday. Walter Energy will pay $11.50 per share for the Canadian coal company, creating one of the world's largest publicly-traded producers of steel-making coal. Shares were up 4.7%.

Shares of Ford (F, Fortune 500) edged up 0.1%, after the automaker reported a 20% increase in November sales on Thursday.

World markets: As part of its battle with inflation, China will move to a more "prudent" monetary policy stance next year, the nation's Political Bureau said. The announcement was made Thursday morning in a report by Xinhua -- the government's official news agency.

The report stated that the move away from a "relatively loose" policy, put in place during the global recession in 2009, is aimed at curbing rising prices in China. The People's Bank of China hiked its benchmark interest rate in October, and raised the reserve requirement ratio for banks twice within one month, according to the report.

Gold powers back into record territory

Currencies and commodities: The dollar fell against the euro, the Japanese yen and the British pound.

Bonds: The price on the benchmark 10-year U.S. Treasury was unchanged and the yield held steady at 3%.