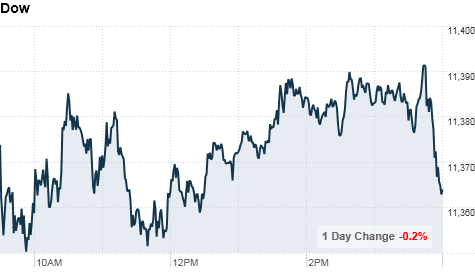 NEW YORK (CNNMoney.com) -- Precious metals like gold and silver took center stage Monday as few investors showed a willingness to jump into the stock market fray on a day with no major economic news on tap.

Stock trading volume was lower than average, and major indexes ended mixed after drifting around breakeven for most of the day. Stocks were reacting to Fed chairman Ben Bernanke's pessimistic outlook about the nation's economy.

"Stocks and oil had been basically moving in tandem, but oil has started to get ahead of itself," said Andrew Lebow, senior vice president at MF Global. "Crude's near highs we haven't seen since the good old days."

Bernanke's outlook: Bernanke told CBS's "60 Minutes" that it could be 4 or 5 years before the economy is back to a normal unemployment rate. He also said fears of inflation are overstated, and that the central bank could resort to another round of stimulus by buying up Treasuries.

"I don't know why people would be so surprised at that timeline," said Joseph Saluzzi, co-head of equity trading at Themis Trading. "There is no evidence of a solid jobs recovery so far, so what do you expect?"

Investors are also looking at talk about a deal involving the Bush-era tax cuts. The reported agreement would extend the cuts for all incomes for two years and would permit the unemployed to file for extended jobless benefits -- a program that expired last week.

"Stocks would love more Bush tax cuts, because it would add liquidity," Saluzzi said. "That's great for short-term traders, but traders in it for the long haul realize this isn't fixing any problems. It's continuing to kick the can down the road, which isn't good in the long run."

Currencies and commodities: Precious metals were leading the pack Monday, as wary investors shifted into commodities.

Silver for March delivery also made strides, hitting a 30-year high of $30.05 an ounce during the trading session before easing off that high to settle at $29.74 an ounce.

Meanwhile, oil for January delivery settled at a new two-year high, edging up 19 cents, to $89.38 a barrel. Crude prices came within spitting distance of $90 earlier in the session.

The dollar was stronger against the euro, the Japanese yen and the British pound.

Companies: Shares of Sprint (S, Fortune 500) jumped to end 6.4% higher after the company said it will start phasing out the Nextel part of its network, known for its push-to-talk phones, in 2013.

AOL (AOL) is exploring a break-up of the online services company that could lead to a merger with Yahoo (YHOO, Fortune 500), according to a Reuters report citing sources close to the plans. Shares of Yahoo ended 0.1% lower, while AOL's stock closed up 1.3%.

A key shareholder of Borders (BGP), hedge fund manager William Ackman of Pershing Square Capital Management, said he is ready to finance a takeover bid for Barnes & Noble (B) for $16 per share, according to a regulatory filing. The news sent shares of Borders soaring to end 28.7% higher, while Barnes and Noble's stock gained 10.6%.

Bonds: The price on the benchmark 10-year U.S. Treasury rose, pushing the yield down to 2.94%.