Stocks set for a dull finish to roller coaster year 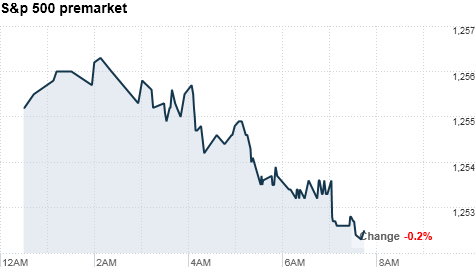 NEW YORK (CNNMoney) -- U.S. stocks were poised for a lackluster trading session for the last day of 2010, but investors remained in good spirits as stocks served up solid annual gains amid the roller coaster year.

Though the market is open for a full trading day Friday, many investors have sealed their books and are celebrating another solid year for the stock market.

Stocks had a strong start to 2010, but concerns about Europe's sovereign debt crisis weighed on the market. A slow economic recovery at home -- particularly in the U.S. job and housing markets -- also pressured stocks.

The May 6 "Flash Crash," when the Dow sank nearly 1,000 points in a matter of minutes, spooked investors and kept their stomachs churning for several months.

But in late August, Federal Reserve chairman Ben Bernanke assured investors that the central bank would do whatever it took to keep the economy from slipping back into a recession. That promise followed by the Fed's decision to pump $600 billion into the economy restored some confidence, and since then stocks have been on the rise.

Trading has been extremely thin during the year-end holiday season, and stocks aren't expected to make much of a move -- upward or downward -- on the last day.

On Thursday, stocks ended the trading session slightly in the red on light volume, despite better-than-expected reports on jobs, housing and manufacturing.

Companies: Shares of Borders Group (BGP) fell 18% in premarket trading after the bookseller said it taking steps to delay payments to vendors as it works to refinance its debt.

Asian markets ended mostly higher in thin trading. The Shanghai Composite gained 1.8%, and the Hang Seng in Hong Kong rose 0.2% during its half-day session. Japan was closed for a holiday.

Help Desk
Track testing tires to find the best
Find out how TireRack tests and reviews tires and why choosing the right ones for your car is so important. Play
Markets
Data as of 11:31pm ET
Data as of Jan 17
Sponsored by
Sections