Dollar could face wild ride in 2011 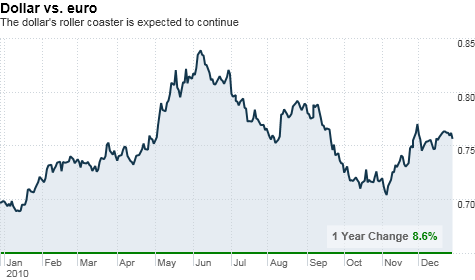 The dollar and euro have had a love-hate relationship. The greenback has gained more than 8% since January but one look at the chart above shows the year has been a series of ups and downs. In June, the euro tumbled to a four-year low against the dollar, when the near-collapse of the Greek economy caught the market by surprise.

Progress was made in repairing the global economy in 2010 but Europe is still under pressure. And that could be a big plus for the U.S. dollar.

No one wants to be caught holding euros right now for fear another round of insolvency rumors will drag the troubled currency even lower.

Say what you want about the current state of the American economy, when investors seek a safe harbor in which to ride out an economic storm, it is the venerable greenback that continues to offer the most comfort.

Ultimately, investors seek the greatest level of certainty possible, and this is as true for central banks as it is for individuals. China and Russia alone hold nearly two trillion in U.S.-denominated assets.

Aside from Europe's risks, there are a number of domestic factors which will likely have an impact on the value of the dollar over the next 12 months.

Fed and interest rates: Analysts are pretty much in agreement that the current fed funds rate of just 0% to 0.25% -- intended to support consumer spending by making loans more affordable -- will remain in effect for the duration of the year. The fed funds rate is the rate at which banks lend excess funds overnight to one another.

In addition to its low interest rate policy, the Fed has just kicked-off a second round of quantitative easing, known as "QE2". Seen by many as a last ditch, 'bet everything on the farm' act of desperation, the scheme calls for the Fed to purchase $600 billion in bank-held assets to increase the supply of cash in the economy.

If the combination of low interest rates and increased liquidity encourages a wave of lending and gets consumers spending again, that could strengthen the dollar.

Whether consumers are willing to take on additional debt after so many learned a difficult lesson in personal finance during the last recession remains to be seen.

Jobs: The final piece in the U.S. dollar puzzle is the employment outlook. November's unemployment rate rose to a frightening 9.8%. This is actually slightly better than the Fed's 'worst scenario' forecast earlier in the year but it remains the real thorn in the side of the recovery.

Without sugar-coating the situation, robust recovery is impossible until employment losses are reversed; yet, new jobs will not be created in any meaningful numbers until the economy shows a dramatic improvement.

While the tea-leaf readers are predicting a much slower recovery period than those following recessions of the past, recent signs suggest that the job market is showing signs of life.

On a net basis, jobs have actually increased in seven of the past 11 months.

Dollar support: In ordinary times, a U.S. dollar outlook based on growth and employment alone would suggest the dollar is due for further devaluation.

These are not, however, ordinary times, and as bad as it appears in America, the short-term prognosis for Europe and Great Britain is even more challenging. Japan is also dealing with a slowing economy teetering on the point of deflation.

In this era of financial uncertainty, it is easy to make the case for a 'flight to safety' to the dollar.

This increased demand will provide additional support for the dollar, and while any one of a handful of possible events could yet derail the recovery, there is certainly greater optimism now then there was a year ago.

Here's hoping 2011 can build further on the tentative steps to recovery made last year.

China is hot, but is it too hot?

The Fed's 'tax on the consumer'
Track 17 major currencies