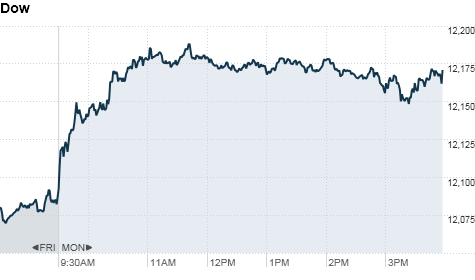 The biggest deals of the day include AOL's (AOL) acquisition of news blog The Huffington Post for $315 million, and a merger between oil drillers Ensco (ESV) and Pride International (PDE).

Shares of Pride and Beckman Coulter both surged Monday, following the news.

Investors welcomed the Danaher-Beckman Coulter deal as a strong sign for the biomedical industry. Danaher's $5.8 million offer valued Beckman Coulter at a 45% premium.

"We haven't seen too many health care deals, particularly ones done at a premium to market value," Ablin said. "Perhaps this could be a spark to get that sector moving."

Economy: In a speech to more than 200 members of the U.S. Chamber of Commerce Monday, President Obama made the case for ramping up spending on education and infrastructure to promote economic growth. The speech is seen as another sign of the thawing relationship between the administration and business community.

A report by the Federal Reserve showed consumer credit rose more than expected in December, climbing by a seasonally adjusted $6.1 billion in December, after increasing by $2 billion the previous month.

Companies: In addition to some major deals, company earnings were also market movers.

Humana (HUM, Fortune 500) fell 3.1% after the health benefits provider reported fourth-quarter earnings that missed analysts' expectations. The company said it earned 63 cents per share, versus a forecast of 81 cents.

U.S.-listed shares of Nokia (NOK) were up 2.1% following reports that a management shake-up is brewing at the Finnish cellphone company.

Currencies and commodities: The dollar fell against the British pound and the euro, but rose against the Japanese yen.

Gold futures for April delivery fell 80 cents to settle at $1,348.20 an ounce on the Chicago Mercantile Exchange.

Stocks: Steady as she goes