Stocks: Steady as she goes 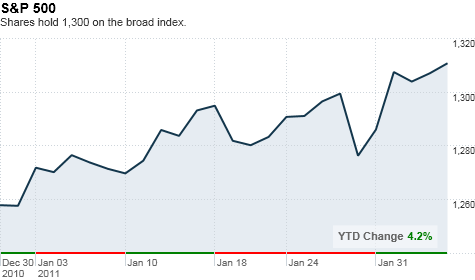 NEW YORK (CNNMoney) -- Stocks could struggle for direction in the week ahead, with relatively little economic data on the agenda and few top-tier companies scheduled to release quarterly reports.

But investors remain bullish about the outlook for stocks this year, as the economy continues to improve and the Federal Reserve looks poised to keep its easy money policies in place.

"We expect the market to trade in a relatively narrow range for the next few weeks," said Paul Zemksy, head of asset allocation at ING Investment Management. "But we think stocks are ultimately headed higher."

The Dow Jones industrial average held firmly above the 12,000 level last week, a key level for those who believe the market has a psyche. The S&P 500 had it's own psychological break-through last week too, closing above 1,300 points. The Nasdaq, not to be outdone, rose to heights not seen since the summer of 2008.

The gains last week came on the back of strong manufacturing data released Tuesday, which stole the spotlight from the normally all-important payrolls report from the Labor Department on Friday.

Investors also cheered fourth-quarter results from several U.S. companies that largely beat analysts' expectations. Of the 308 companies in the S&P 500 that have reported earnings so far, 72% came in better than expected, according to data from Thomson Reuters.

Corporate earnings have been on the rise for several quarters, but sales growth had been lackluster, suggesting that cost-cutting was driving profitability. In the fourth quarter, however, that trend seems to have shifted.

As of last week, 70% of the companies in the S&P 500 have reported sales above analysts' expectations, up from 61% over the past four quarters.

In the week ahead, investors will get results from 62 companies in the S&P 500.

The job market is getting better. Really.

Meanwhile, investors will also be keeping an eye on Washington, where the President and the chairman of the Federal Reserve are both scheduled to make speeches on economic issues.

The situation in Egypt, where protests against the government of President Hosni Mubarak escalated last week, remains a source of concern for Wall Street. But traders said that as long as the turmoil doesn't spread to other countries, stocks will not be affected.

Dan Wantrobski, director of technical research at Janney Montgomery Scott, said he believes there is nothing "fundamental" on the horizon that could stop the rally in the stock market.

"But we are not ruling out another outlier event which could shock the system at any time," Wantrobski wrote in a research report. "This suggests to us that caution should still be exercised."

As he seeks to repair frayed ties with the business community, President Obama will make a highly anticipated speech at the U.S. Chamber of Commerce in Washington.

On the economic front, the Federal Reserve will release its December report on consumer credit in the afternoon.

There are no major economic reports due on Tuesday.

Fed chairman Bernanke, the nation's top monetary policy maker, is scheduled to testify before House Budget Committee in the morning.

The government's weekly report on initial claims for jobless benefits comes out in before the market opens.

Another government on wholesale inventories in December comes out after the bell. The federal Treasury Budget for January is due later in the day.

Before the market opens, the government is scheduled to release data on the U.S. trade balance in December. A report on consumer sentiment from the University of Michigan comes out after the market opens.