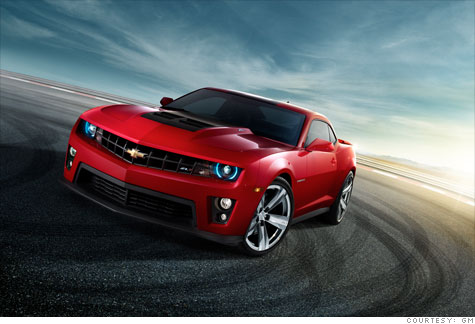 The ZL1 will be a pricey, high-performance halo car for the Chevrolet Camaro line-up. By Peter Valdes-Dapena, senior writerFebruary 9, 2011: 2:53 PM ET
Follow Peter on Twitter: @PeterDrives

NEW YORK (CNNMoney) -- General Motors, the same automaker that's been winning awards with the gasoline-optional Chevrolet Volt, is clearly going after the fossil-fuel crowd with a 550-horsepower version of its Camaro performance coupe unveiled at the Chicago Auto Show Wednesday.

This version of the Camaro will be considerably more powerful -- and probably much more expensive -- than the 426-horsepower Camaro SS that's now available.

"It's the most technically advanced Camaro ever," said Rick Scheidt, head of marketing for Chevrolet, in an announcement, "so we've chosen a name from the most elite and exclusive Camaro in history."

The ZL1 name was last used on an all-aluminum racing engine developed by GM in the late 1960s and installed in just a few 1969 Camaros.

This Camaro ZL1 has the same supercharged 6.2-liter V8 engine used in the CTS-V line of Cadillac luxury cars.

The ZL1's bulging hood sports a large pair of air ducts cut into a carbon fiber panel. The front end of the car has what GM calls a "Transformers 3" style bumper, after the movie in which the Camaro plays a starring role.

"Everything about the ZL1's design is directly related to its technology and serious performance, especially aerodynamics," GM vice president for global design Ed Welburn said in the announcement.

The ZL1 will come equipped with a six-speed manual transmission and the same dual-mode exhaust system -- the pipes open up at high engine speeds for better performance -- used in Chevrolet Corvettes. The car will also have the same "magnetic ride" adjustable suspension system used in the Corvette.

Fuel economy estimates for the Camaro ZL1 are not yet available. The 2011 Camaro SS, powered by a non-supercharged 6.2-liter V8, gets an estimated 24 miles per gallon on the highway and 16 in the city.

While it might seem odd for the same automaker that produces the Chevrolet Volt to be unveiling a car like this, it's all part of a larger strategy, said Todd Lassa, a Detroit-based editor for Motor Trend magazine.

"You have to have both," he said, "and you have to look at the competition for this car, and it's the Ford Mustang."

The Mustang comes in a variety of different performance levels, including the 550-horsepower Shelby GT500, and the Camaro has to be prepared to go head-to-head, Lassa.

The ZL1 is a "halo" car that will spark more consumer interest than sales, said Lassa. While pricing hasn't been announced yet, it's almost certain to be the most expensive Camaro available. Ultimately, he said, it will be one of the few models in GM's line-up that will sell in lower number than the Volt.

For those who need a bit more practicality with their performance, the Chrysler Group unveiled the 2012 model year version of the Charger SRT8 four-door performance sedan at the Chicago show.

Scheduled to go on sale later this year, the new Charger SRT8 will have a 465-horsepower V8 engine and shiftable 5-speed automatic transmission. That's a 40-horsepower increase from the 2010 model year, the last year in which the SRT8 was produced.

While the Charger's fuel economy figures aren't available, to save fuel, the engine shuts down four of its eight cylinders when their power isn't needed.