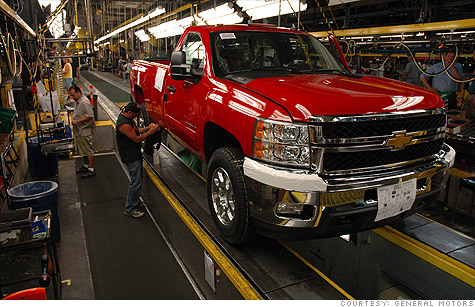 Factory workers, like this one building a Chevrolet Silverado pickup, will enjoy the biggest bonuses GM has ever paid. By Peter Valdes-Dapena, senior writerFebruary 14, 2011: 2:03 PM ET
Follow Peter on Twitter: @PeterDrives

NEW YORK (CNNMoney.com) -- General Motors will pay bonuses of at least $4,000 each to its factory workers -- by far the largest bonuses the automaker has ever paid its blue-collar employees.

Before this, the biggest bonus GM (GM) ever paid its union employees was $1,775 in 1999. Exact details of the bonus amounts paid will be revealed after GM outlines its annual profit later this month.

"This payout is a good example of how we are sharing in the success of the New GM," the automaker said in a letter to its factory employees who are member of the United Auto Workers union.

The text of the letter was published by the Flint Journal.

GM is also paying bonuses to its non-union white collar employees. Those bonuses could be as much as 50% of a worker's salary in some cases. For the vast majority of those workers, bonuses will be between 4% and 16% of the employee's base pay.

GM received a bailout of $50 billion by the U.S. government, starting in early 2009, a plan that included giving the government a 61% stake in the company.

The government recouped much of this money when it sold GM shares during the automaker's successful initial public offering in November. But about $27 billion in bailout funds remain unpaid. Much of that will be repaid as the government sells more of its shares.

The bailout and restructuring relieved GM of the bulk of its debt, helping the automaker to become profitable. Meanwhile, GM sales have increased as the automaker's product line-up has become more competitive with foreign rivals in terms of quality and fuel economy.