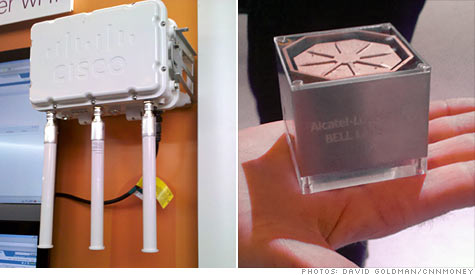 BARCELONA, Spain (CNNMoney) -- There were dozens of Wi-Fi networks at this year's Mobile World Congress in Barcelona. But with more than 60,000 people in attendance, the systems were so overloaded that there may as well have been one landline connection with a 56k modem.

Areas marked "free Wi-Fi here" often had no or painfully slow connections. Demonstrations from Microsoft, Google, Intel, Yahoo, Hewlett-Packard and Research In Motion, among others, became comical when the presenters were unable to connect even to their own networks.

"That's the problem with networking conventions," said Google CEO Eric Schmidt during a keynote address this week. "Everyone is on the network."

The problem is easy to understand, but the solution is much more complicated.

Mobile World Congress was a peculiar event in that most people in attendance had smart devices with the ability to connect both to 3G networks as well as Wi-Fi and Bluetooth. Many of the attendees carried two such gizmos, like a BlackBerry and an Android phone, or an iPhone and an iPad.

That's a whole lotta gadgets trying to suck down a whole lotta data. This year's Consumer Electronics Show in Las Vegas, which draws the same kind of uberwired crowd, had similar connectivity problems.

Cisco (CSCO, Fortune 500), which operated the free Wi-Fi network at Mobile World Congress -- and plastered that fact all over the convention -- estimated that there were 40,000 unique devices trying to connect to its network alone. Average peak usage reached about 3,200 devices managing to connect simultaneously to Cisco's 110 access points.

Though Cisco asked to install more access points, Mobile World Congress' operators limited the availability of the free network to 10% of the conference's locations. (The convention ran its own paid Wi-Fi network as well, also managed by Cisco.) That led to digital stampedes: The press room access point, designed to supply connections to 200 clients, had 700 people accessing the network.

Cisco provided similar Wi-Fi access at this year's Super Bowl. Despite having twice as many attendees, that event went off without a hitch.

Why? Three main differences: A small minority of the more than 100,000 fans at the stadium were accessing Wi-Fi, Cisco was able to install 1,000 access points at Cowboys Stadium, and there wasn't nearly as much interference from other networks.

In Barcelona, just in the immediate area surrounding Cisco's booth, the networking company detected 75 Wi-Fi access points. That's going to cause a lot of interference, which is part of the reason why other networks were malfunctioning as well.

Does this matter in the world beyond tech industry conventions? Yes, because the hockey-stick-like growth of smartphones, tablets and other connected devices means this kind of data demand deluge is happening more often.

Network operators are already dealing with this problem in crowded areas like baseball parks, concert venues and other big public locations, like Times Square.

China Mobile Chairman Wang Jianzhou said in a keynote address this week that wireless cellular networks will never be able to keep up with the rapid rise in mobile data demand from their users. Wi-Fi must be rolled out in public areas to offload some of the traffic onto other networks, he said. AT&T (T, Fortune 500) has already deployed a Wi-Fi network in Times Square.

Wi-Fi is an attractive solution, because it offers the same amount of coverage at 1/4 to 1/5 the cost of a cellular solution, according to Ray Smets, head of Cisco's wireless networking business unit. Though you can't make traditional cell phone calls over Wi-Fi, more services like Skype are popping up that allow you to make Voice over Internet Protocol (VoIP) calls.

But the carriers have a big problem with Wi-Fi: You don't have to pay them to use it.

That's where the coolest, most-talked about gadget of the conference comes in: Alcatel-Lucent's new invention called "light radio." The company was able to put all the components of a typical cell tower into a box the size of a Rubik's cube.

Practically, it means mobile carriers will be able to deploy 2G, 3G and 4G networks on one light radio unit instead of putting up three separate cell antennas. The incredibly efficient design of the device means the light radio offers 30% more capacity, doubles the number of downloadable bits and cuts out the interference that was being caused by all of the other antennas operated by the same network.

Alcatel-Lucent (ALU) is planning on bunching the light radios together into four-by-four squares to create "metro cells," which can be deployed in public areas to offload the demand placed on the network's towers.

Of course, light radios alone won't fix the problem: both Wi-Fi and light radio metro cells will be needed to solve the coming onslaught of data demand.

Meanwhile, there's a lot of work to be done on both solutions.

At the end of the conference, Cisco said it was proud of the service that it provided. The company estimates that it transmitted more than 1 terabyte (1,000 gigabytes) of data over its free network.

"The service wasn't that bad for free," said Cisco's Smets. "We're the good guys. We're the knights in shining armor. We knew it was a risk to put our name on it, and we ran into challenges, but that will make us better for the next time."

Life in 2020: Your smartphone will do your laundry