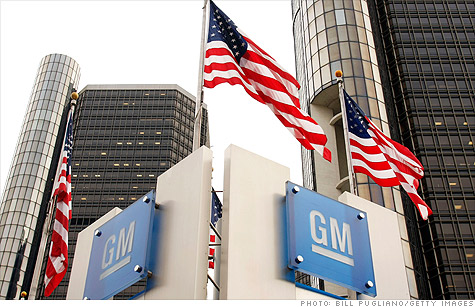 NEW YORK (CNNMoney) -- The U.S. Treasury is giving up $14 billion in tax revenue because of a sweetheart deal it's giving General Motors.

The automaker is expected to post its first profitable year since 2004 when it reports fourth-quarter results on Thursday. But GM (GM) won't have to worry about being hit with a big tax bill because billions in previous losses will provide shelter for years to come.

That break will reduce GM's U.S. tax bill by an estimated $14 billion in the coming years, and its global taxes by close to $19 billion, according to a company filing.

Companies typically get a break on future taxes because of past losses. But in most cases they lose that tax break during bankruptcy, because the losses are offset by the "income" the company receives from shedding its debt.

The power behind GM's throne

Since the company shed $30 billion in debt during bankruptcy, it should have wiped out most of the tax break. GM even warned it expected to lose those tax breaks shortly before filing for Chapter 11 protection.

But somehow, that never happened, and the automaker was able to keep most of its tax breaks, essentially receiving a $14 billion "gift" from the government.

While it's unclear why GM was allowed to carry over its losses, some experts insist that GM got preferential treatment.

"A lot of things were done differently here," said Heidi Sorvino, head of the bankruptcy practice at Lewis Brisbois Bisgaard & Smith. She said that the tax break was just another example of how GM's bankruptcy process was unlike any previous bankruptcies.

Officials with the Treasury Department and GM insist that the tax break was not special treatment, and that any company going through bankruptcy could have gotten the same breaks.

Treasury spokesman Mark Paustenbach said GM's ability to hang onto the tax breaks it had before bankruptcy "depends on the application of long-standing tax rules to GM's particular facts. The Treasury Department did not publish any guidance during the economic downturn that changed these rules either in general or for corporations that received government assistance."

GM said its tax breaks were partly reduced following its emergence from bankruptcy, although it would not give details.

Why give GM a break?

One reason the government might have let General Motors claim the loss, was to reduce the perceived cost of the bailout, said Linus Wilson, finance professor at the University of Louisiana at Lafayette.

By allowing GM to carry over its losses, the reduced tax collections from the company were unlikely to be counted under most accountings.

Also, the fact that GM kept the tax breaks made its stock more attractive at the time of its initial public offering last November, Wilson said.

"It made it easier to sell shares. It helped GM get on its feet sooner," he said.

Treasury held 61% of the stock at the time of the IPO and received $13.5 billion, or about three-quarters of the proceeds from the record first-day stock sale. So taxpayers got some benefit from the tax break.

But Wilson said the improvement in stock value due to the tax break will offset only a small fraction of the tax revenue Treasury is giving up.

"Is it worth the cost? No. It's a bad policy from a government point of view," Wilson said.