Treasuries: 10-year yield closing in on 3% 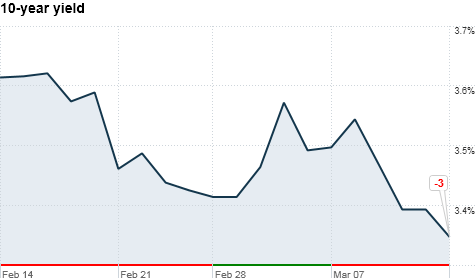 The yield on the benchmark 10-year note dropped to 3.3% on Tuesday, from 3.35% late Monday. Bond prices and yields move in opposite directions.

Panic seized Japanese investors Tuesday, with the nation's stock indexes plunging more than 10% as the nation's nuclear crisis deepened in the aftermath of last week's earthquake. The Nikkei 225 index, the most prominent measure of Tokyo market stocks, was down more than 14% at one point in the session.

The 9.0 earthquake in Japan on Friday was the most powerful to hit the country in more than 100 years, triggering massive tsunamis. The confirmed death toll is 2,475, though thousands more are missing and 450,000 people are reported homeless. (CNN: Anxiety in Japan grows as rescue workers find more bodies)

Bonds reacted little to the Federal Reserve's Federal Open Market Committee statement, where the central bank kept the nation's interest rate at its 0%-0.25% range and said it would continue its quantitative easing strategy.

The disaster in Japan has compounded uncertainty in financial markets, as investors remain concerned about civil tensions in the Middle East and North Africa. Geopolitical worries tend to send investors to the perceived safety of Treasuries, as they are backed by the U.S. government and are considered safer places to plunk cash.

According to news reports, Japan may opt to sell more of its U.S. Treasury holdings to help pay for rebuilding after the quake. Japan is the second-largest foreign holder of Treasuries, after China.

"It's a lot of speculation at this point, but it's likely that Japan will indeed sell some of its Treasuries," said Kim Rupert, fixed income analyst at Action Economics. "They're going to have to finance the rebuilding somehow."

The 10-year yield has held in the mid-3% range since for three months, but it has headed to the lower end in recent sessions as international worries remain in the spotlight. The last time the yield dipped below 3% was in early December.

By comparison, U.S. stocks were mired in a sharp sell-off Tuesday. Risk appetite was tarnished after news of damage to several Japanese nuclear reactors. Early Tuesday, the owner of the Fukushima Daiichi nuclear power plant in northeastern Japan reported an "explosive impact" at the plant's No. 2 reactor, a day after a hydrogen explosion rocked another reactor.

Japanese Prime Minister Naoto Kan said the risk of radioactive material leaking from the crippled plant was very high, and a government spokesman warned people within 18 miles of the facility to stay indoors.