Stocks claw back from steep sell-off 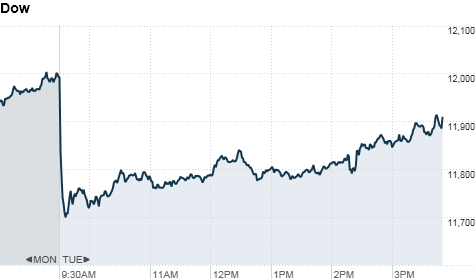 All three of the major U.S. stock indexes closed down about 1.2%, after plunging much deeper earlier in the day.

The Dow Jones industrial average (INDU) posted a 138-point loss, after falling 297 points earlier. All but one of the 30 Dow components were in the red. The S&P 500 (SPX) fell 15 points and the Nasdaq (COMP) dropped 34 points.

A somewhat positive statement from the Federal Reserve, which would typically garner attention, failed to sway investors significantly in the afternoon.

"Everybody's looking at Japan over the Fed," said Phil Streible, a senior market strategist with Lind-Waldock. "People are scrambling and trying to figure out the specific impact of Japan's problems."

The Fed made no mention of the events in Japan. Markets are reeling from the staggering human and economic toll from Japan's 9.0-measure earthquake and subsequent tsunami last Friday, which killed at least 3,373 people.

The earthquake also damaged Japan's Fukushima Daiichi nuclear power plant, and subsequent explosions and fires there have only escalated fears about a nuclear crisis in Japan.

Insurance companies in the S&P 500 also sank, led by Aflac (AFL, Fortune 500) which tumbled 5.6%. Aflac generated about 75% of its revenue in Japan last year.

Netflix (NFLX) was one of the few stocks to buck the downward trend, rising 7.9% after Goldman Sachs (GS, Fortune 500) upgraded the stock earlier in the day.

The dollar rose versus the euro and the British pound, but fell slightly against the yen. Like the U.S. dollar, the yen is considered a safe-haven asset in times of economic uncertainty.

The price on the benchmark 10-year U.S. Treasury rose as investors sought the safety of government debt, pushing the yield down to 3.32% from 3.35% late Monday.

The Japanese government has taken steps to shore up the nation's financial system. But investors remain nervous about the short-term outlook for the world's third-largest economy.

Ahead of the opening bell, steep losses in world markets triggered the New York Stock Exchange to invoke Rule 48 -- which gives the exchange the right to pause trading in the event of exteme volatility.