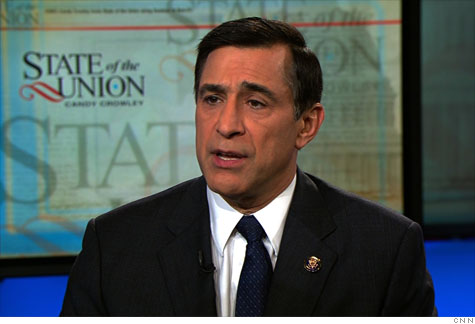 NEW YORK (CNNMoney) -- The trustee seeking repayment for victims of Bernard Madoff's multi-billion dollar Ponzi scheme has been subpoenaed by a House committee looking into the SEC's chief council, who inherited a Madoff investment from his late mother.

Rep. Darrell Issa, the California Republican who chairs the House Oversight Committee, said in a statement that he's seeking documents from the law firm of Irving Picard, the court-appointed trustee in the recovery of assets stolen from Madoff. He wants to learn more about David Becker, the SEC's general counsel who advised the commission on the case.

Becker and his two brothers inherited their mother's account when she died in 2004. Picard has filed suit against Becker and his brothers for about $1.5 million -- the amount in alleged profit that the family took from the investment.

"Victims of the Madoff swindle rightly feel cheated by the SEC's ineptitude," Issa said in a statement. "The decision to allow David Becker to work on the Madoff case, despite family earnings from a Madoff account, necessitates answers."

The subpoena was filed after SEC chief Mary Schapiro got grilled by angry lawmakers during a House hearing last week. During the hearing, she said she wished her chief lawyer, who stepped down last month, had recused himself from the Madoff investigation.

At the hearing, Schapiro said Becker told her in 2009 that a deceased relative had a closed account with Madoff, but that the SEC's ethics officer said it was all right for Becker to continue working on the case.

As part of its Madoff recovery process, the trustee has sued about 1,000 people for about $100 billion. These former Madoff investors are accused of withdrawing more from the account than they put in. In the eyes of the trustee, these "net winners" are beneficiaries of the Ponzi scheme.

Madoff trustee gets ready to hand out $2.6 billion

But many of these so-called "winners" claim that they didn't know they were benefiting from a Ponzi scheme. Also, many of them claim to have been financially wiped out by Madoff, since they were living off withdrawals that were fraudulently presented as legitimate returns. In reality, their money had been stolen, and Madoff was paying them with money stolen from other investors, according to the trustee.

The trustee is allowing investors who he has sued to file for hardship exemptions, to be judged on a case by case basis.

The Becker brothers are among the prominent individuals and companies being sued by the trustee, including the owners of the New York Mets baseball team, members of the Madoff family, JPMorgan, HSBC and UBS.

Madoff was arrested on Dec. 11, 2008 on multiple federal fraud charges for running a pyramid scheme that persisted for decades and swept up thousands of victims in its net. Madoff pleaded guilty in March 2009 and is serving a 150-year sentence in a federal prison in Butner, N.C.