Chevrolet Volt vs. Cruze Eco: Battle of the gas misers 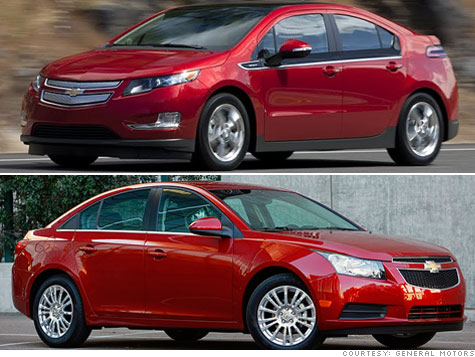 The Chevy Volt (top) promises hi-tech gas-free driving for many miles but it costs twice as much as the fuel-efficient Chevy Cruze Eco. By Peter Valdes-Dapena, senior writerMarch 25, 2011: 11:03 AM ET
Follow Peter on Twitter: @PeterDrives

NEW YORK (CNNMoney) -- The Chevrolet Volt is sort of like the Corvette ZR1 of fuel economy. It is, in its class, General Motors' technical tour de force.

So the Chevrolet Cruze ECO is sort of like the standard non-Z Corvette. No, it's not the ultimate "King of the Mountain" chest-thumping package, but it's still very good and -- this is key -- it costs less than half as much.

But which would be right for you?

Do you want to be seen saving the planet?

Surprisingly neither of these cars will probably get you the attention such an endeavor deserves. During a week spent driving the Volt around New York City it got nary a second glance from anyone. Shocking, really. The Volt's design is subtle enough, I figured, that people just didn't pick it out when it wasn't on a billboard.

The Cruze Eco, on other hand, did get at least a little attention. It's slightly lower to the ground and has a subtle spoiler on the trunk lid which, taken together, give it a bit of a sporty look.

The Chevrolet Volt, according to EPA estimates, can go about 35 miles on a charge before needing to tap into the gas tank. During my week with the car I actually should have been able to get by on a fraction of a gallon of gas because, as it happens, I rarely drove much more than 35 miles on any one day.

I say "should have been" because my attempts to charge the car met with frustration and failure and had to rely on the gasoline engine. Only later did I figure out why. The electrical wires that ran to the socket I used also powered an outdoor light fixture. When it comes to electricity, the Volt isn't taking leftovers from some stupid lightbulb.

If you're thinking of buying a Volt, keep in mind you might have to pay an electrician to clean up your wiring.

The Cruze Eco, on the other hand, got relatively good mileage in the city and on the freeway. Now, my mileage was nothing like EPA-estimated 28 city and 42 highway. But my city driving wasn't what the EPA calls "city driving." This was New York City mash-the-gas, stomp-the-brakes, breathe-then-repeat driving. I got less than 20 miles per gallon in town. Seriously, though, for a non-hybrid car, that's good.

The Volt costs about $41,000 to start but, factoring in a federal tax credit, the price tag comes down to about $32,500. Local and state incentives could cut the cost even more. The Cruze Eco, on the other hand, starts at about $18,000. It's not the cheapest Cruze, but it's still dirt cheap by most measures.

So what does the Volt give you for all that extra money?

First, you get the potential of driving days -- weeks, maybe -- without burning gasoline. (A full charge costs about $1.50, much cheaper than gas.) You also get a fancier interior, heated seats -- because heating the seats uses less power than heating the whole cabin -- and standard navigation.

The Cruze Eco saves gas through the removal of unnecessary weight, turbocharging (to get the most out of the engine) and, for the full 42 mpg highway rating, a six-speed manual transmission.

All that stuff makes it a kick to drive.

All the Cruze Eco lacks are four-wheel disc brakes -- it has old-fashioned drum brakes in back.

The Volt feels less zoomy and, ironically, more like a cruiser than the Cruze. Hundreds of pounds of lithium-ion batteries have a way of way of keeping a car settled to the ground for a nice, cushy ride.

Even under gasoline power, the lack of almost any mechanical connection between the engine and the wheels makes for an extremely smooth driving experience.

The Volt does have a "Sport" mode button that allows the battery to unleash more power while the gas engine cranks harder to produce the needed kilowatts. Even when pushing hard, the Volt accelerates with style with nary a jolt or a bump.

It's kind of like driving a full-sized luxury car, all creamy and floaty, but in a small package. Rear seat legroom is slightly tighter than in the Cruze and the lack of a center rear seat can be an inconvenience.

Set aside the price of each car and the Volt is the clear winner between these two. Even if you never plugged it in, the Volt roughly matches the fuel economy performance of the Cruze Eco on the highway and beats it in the city.

But the simple fact is that the Volt costs much more, even after the incentives. Yes, the Volt is a little fancier inside, but is that enough?

So for this reviewer, this is a case of heart vs. mind. In my heart, the Volt is just cooler. But my mind, and my right foot, lean toward the Cruze Eco.

GM vs. Ford: The hundred-year war