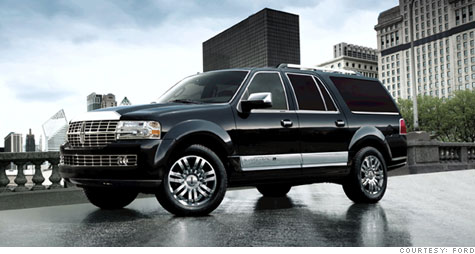 Ford is cutting off new orders for Tuxedo Black paint on some of its large truck and SUV models, while restricting its use on others, due to supply problems from Japan. By Peter Valdes-Dapena, senior writerMarch 25, 2011: 1:02 PM ET
Follow Peter on Twitter: @PeterDrives

But today, as Japanese suppliers scramble to come back on line after the devastating earthquake and tsunami, Ford Motor Co. is asking its dealers to order trucks and SUVs in any color but black.

Specifically, Ford (F, Fortune 500) is asking dealers not to order any new full-size pick-ups or SUVs in so-called Tuxedo Black because of a problem getting a paint ingredient from a supplier in Japan. The automaker is also scaling back, but not stopping, its use of Tuxedo Black on mid-sized SUVs and the large Ford Taurus and Lincoln MKS sedans.