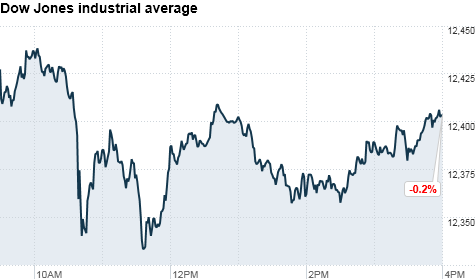 NEW YORK (CNNMoney) -- U.S. stocks fell slightly Thursday after Japan was hit with another major earthquake and the price of oil rose above $110 a barrel.

A 7.1-magnitude earthquake occurred off the coast of Japan shortly after 10:30 a.m. ET, only a few miles west the March 11 earthquake. The news sent the Dow down as much as 95 points, but stocks slowly recovered throughout the afternoon.

"This just adds more uncertainty and more concerns about how long it's going to take for Japan to get back on its feet," said Paul Zemsky, head of asset allocation with ING Investment Management. "We're already dealing with these supply chain problems, and this could just make it worse."

Japan's news agency NHK issued a tsunami warning that was lifted two hours later, with no reports of major damage. And the troubled Fukushima-Daiichi nuclear power plant did not experience any further damage, according to NHK.

"With this earthquake and oil, there's no fuel for this market to go higher," said Stephen Carl, head trader at Williams Capital.

Investors mostly took a cautious approach ahead of earnings season, which has its unofficial kick off Monday, when Dow component Alcoa (AA, Fortune 500) reports.

"There are a lot of things that could influence the market right now -- oil, Libya, a budget deal out of Congress -- but corporate earnings are going be the catalyst to get stocks going higher," Zemsky said.

With the S&P 500 continuing to nudge up against the key 1,340 level, Financial Enhancement Group market analyst Joe Clark said investors are feeling a stronger pull toward selling and are just waiting for a reason to follow through.

The 1,340 level on the S&P has been a resistance point for stocks since mid-February, when the S&P 500 hit its high for the year.

Government Shutdown The Securities and Exchange Commission said Thursday that, in the case of a Federal Government shutdown, the SEC will function with "an extremely limited number of staff" and only basic investor services will be available.

The SEC will continue to accept securities filings, but available services related to filings will be limited. The SEC also said it will continue to investigate fraud and securities violations, but may only be able to respond to a limited number of incidents.

Economy: Investors are also mulling Thursday's decision by the European Central Bank to raise its key lending rate to 1.25%.

Like the Federal Reserve, the ECB and Bank of England have each kept interest rates at historic lows for the past three years as a way to spur economic activity following the financial crisis and subsequent recession.

Meanwhile, the Labor Department reported the number of people filing claims for first-time unemployment benefits fell by 10,000 to 382,000 in the latest week.

Companies: Retailers were among the biggest movers as dozens of companies reported March same-store sales.

Japan's Nikkei rose 0.1% after the Bank of Japan kept interest rates unchanged but set up a $11.73 billion special funding facility for banks affected by the March 11 earthquake.

Currencies and commodities: The dollar rose against the euro and the British pound but fell against the Japanese yen.

Gold rally is back

Bonds: The price on the benchmark 10-year U.S. Treasury edged lower, with the yield at 3.55% compared with 3.56% late Wednesday. Bond prices and yields move in opposite directions.