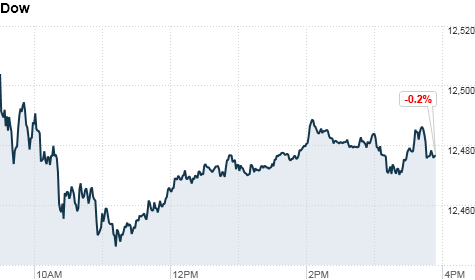 NEW YORK (CNNMoney) -- U.S. stocks ended mixed Monday, with technology shares rising modestly, amid a pause in the flow of corporate results and ahead of a statement from the Federal Reserve later this week.

In the commodities market, gold and silver prices held gains but closed off session highs. Oil held near $112 a barrel.

Stocks retreated after the Dow ended last week near a 3-year high on a batch of strong corporate earnings.

While there were no top-tier corporate results released Monday, the week ahead brings quarterly results from nine Dow components and 180 members of the S&P 500.

Shares of Netflix (NFLX) fell nearly 5% in extended hours after the company reported strong quarterly gains in sales and profits, but offered a conservative outlook for the current quarter.

Investors were also awaiting comments from Federal Reserve chairman Ben Bernanke, who is scheduled to hold a first-ever news conference Wednesday after the central bank releases its official policy statement.

Ryan Larson, a senior equity trader at RBC Global Asset Management, said corporate reports due after the closing bell could help set the tone for trading in the following session. But he expects the market to drift between small gains and losses in the meantime as investors hold off on big bets before hearing from Bernanke.

The market was closed Friday in observance of Good Friday.

The dollar fell against the euro and the British pound, but rose against the Japanese yen.

A weaker dollar tends to support prices for commodities that are priced in the U.S. currency. As a result, oil and gold often rise when the greenback retreats.

In addition, precious metals have benefited by growing concerns about inflation, which has taken off in emerging markets and is on the rise in Europe.

Gold and silver are assets that many investors see as a hedge against inflation, since tangible assets tend to hold their value better than stocks or bonds when prices are rising.

Economy: Sales of new homes rose more than expected in March, although the weak housing market remains a concern for many investors.

Economists were expecting a sales rate of 280,000, according to consensus estimates gathered by Briefing.com.

"Home sales are critical, and even though we may see some marginal improvement, they're still down considerably from where they were before the downturn," said Andy Hugos, financial consultant with LPL Financial.

Companies: Shares of Kimberly-Clark (KMB, Fortune 500) were down 2.7% after the maker of paper products said first-quarter earnings fell 6.5% from the same period last year.

Stock markets in Britain, Germany, France and Hong Kong were all closed for Easter Monday.

Bonds: The price on the benchmark 10-year U.S. Treasury rose, pushing the yield down to 3.36% from 3.4% late Thursday. The bond market closed early Thursday and remained closed in observance of Good Friday.