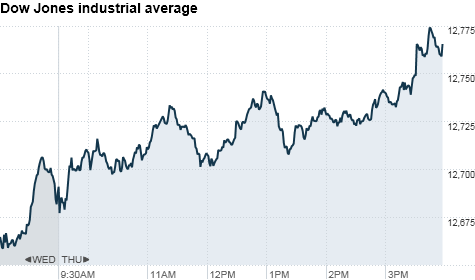 Boeing (BA, Fortune 500) led the Dow higher, with its shares rising more than 3% a day after the company reported its quarterly results. Exxon Mobil (XOM, Fortune 500) was among the biggest drag on the blue-chip index, after it reported sales that fell short of forecasts. Exxon Mobil's stock slid less than 1%.

The tech-heavy Nasdaq was weighed down by shares of Akamai Technologies (AKAM), which dropped 14% after the company warned that sales would fall short of expectations. Still the Nasdaq closed at its highest level since December 2000.

How the dollar rout could turn ugly

"A lot of the action is a repeat of what we had yesterday following the Fed announcement, we got the dollar declining, stocks rising and gold heading higher," said Brian Gendreau, market strategist with Financial Network.

The U.S. dollar fell against the euro, British pound and Japanese yen, with the U.S. Dollar Index, a security that tracks the dollar's value against other major currencies, struck its lowest level in 21 months.

Economy: The dollar's decline was in part due to the weaker-than-expected economic data that was out on Thursday.

The Department of Commerce released its report on first-quarter gross domestic product, showing that first-quarter GDP expanded at an annual rate of 1.8%, falling short of the 2% growth economists surveyed by CNNMoney had forecast.

That was worse than expected and also marked the third week in a row that jobless claims came in above the key 400,000 level.

A report from the National Association of Realtors showed a 5.1% rise in pending home sales for March, much higher than the 1.7% rise economists had expected.

Companies:Citrix Systems (CTXS) shares jumped 9.7% on Thursday, making it the best performer on the S&P 500, after the software supplier posted a strong jump in profits and higher-than-expected revenue.

After the closing bell, Microsoft (MSFT, Fortune 500) reported a quarterly profit of $5.2 billion, up 31% from a year earlier, on sales of $16.4 billion. Earnings and revenue topped forecasts.

Shares of Research in Motion (RIMM) plunged 12% in after-market trading after the BlackBerry maker cut its revenue forecast, citing lower than expected demand for smartphones.

Exelon (EXC, Fortune 500) an electric utility, announced a merger with Constellation Energy (CEG, Fortune 500), a supplier of natural gas and other energy products. The deal is worth $7.9 billion. Constellation's stock rose 3.5%.

Currencies and commodities: Oil for June delivery rose 11 cents to $112.68 a barrel.