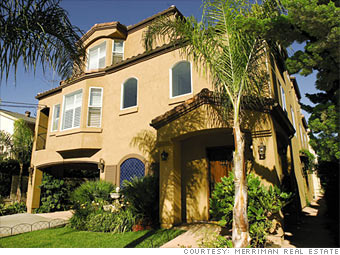 See More Views:
$799,000
This three-story townhome in a subdivision five minutes from downtown is already discounted from $869,000 - and would have fetched $900,000 at the height of the boom.
Deals abound on the California coast, but prices are picking up again.

It's been a rough road for San Diego. Prices have dropped 9.8% in a year, according toEconomy.com. It also ranks No. 9 in foreclosures in the nation, thanks to the particularly high percentage of adjustable-rate loans that were typical in many of California's most overheated markets during the boom years. But sales activity has been picking up lately, and freshly discounted homes are now getting multiple offers above their asking price.

Urban-minded retirees tend to look to San Diego's downtown, now revitalized and much more desirable than just a decade ago. Other retiree-flavored areas: Rancho Bernardo, with its array of golf courses, and Oceanside, which has seen some significant price adjustments. In fact, it's the high end where you might find the best bargains, because much of the renewed activity has been for entry-level homes, while luxury properties have been slower to move.

Be forewarned, though, that things on a daily basis here are not cheap. San Diego County's cost of living is 47% above the national average, according to the Council for Community and Economic Research. But its seaside location forms something of a floor for housing prices. And with a climate that's "75 and sunny in the dead of winter," quips Lori Staehling, president of the local realtors' association, the San Diegans, who humbly refer to their hometown as "America's Finest City," would argue you get what you pay for.