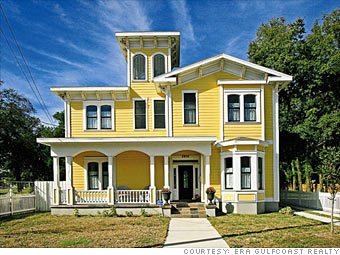 See More Views:
$499,000
Agents say this newly built traditional four-bedroom home in the up-and-coming Robles area would have gone for $600,000 in 2005. One negative: It's right next to the Interstate.
Florida's Gulf Coast metropolis has less glamour - and lower prices.

It's not the Atlantic coast of Florida, with symbols of opulence like lavish Palm Beach estates or multimillion-dollar spec homes. But Tampa, with its more blue-collar feel, offers the same brand of South Florida living at a far more affordable price. How much more affordable? Prices are consistently lower by 50%, estimates Deborah Farmer, president of the Greater Tampa Association of Realtors.

To be sure, Tampa lived large during the boom years; prices rose 100% from 2001 to 2006. That was fueled in large part by speculators just looking to flip, and when they started vanishing in 2006, thanks to the slowing market and a tightening of credit, so did those massive annual increases. Real estate values have fallen 17.5% in a year, according to the Case-Shiller index.

But more than other markets, Tampa could be nicely positioned for a rebound. Its relatively strong local economy, coupled with the fact that the bust hit here earlier than in some other markets, means that the downside may have largely played itself out. The median price is now $222,000, down from $275,000 last year, and top NAR economist Lawrence Yun has singled Tampa out as well prepped for price recovery, estimating 20% or more appreciation in the next five years.

A prime spot for high-end bargain hunters: Gulf-front luxury condos in nearby Clearwater or St. Petersburg, which might have gone for a minimum of $1 million a few years ago, can now be snapped up in the $600,000 range.