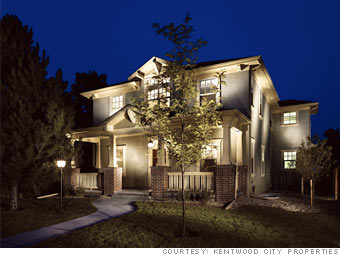 Contrary to what some planned communities' brochure imagery would have you believe, not all retirees yearn for the sun-soaked desert of Phoenix or Las Vegas or a golf community in Florida. There's a sturdy minority who prefer the active, mountain-oriented lifestyle of skiing, hiking, and horseback riding, and for those types Denver is a sort of contrarian retirement destination.

It's contrarian in another way too: During one of the largest real estate run-ups in U.S. history, from 2001 to 2005, the Mile High City pretty much stood still. The reason? Its job base, heavy on high tech and information services, was rocked by the collapse of the tech bubble in 2000 and never really recovered. "The rest of the country was booming with 20% annual appreciation, and we were barely getting by with 4%,"says Mike Rinner, executive vice president of housing research firm Genesis Group.

If there's a silver lining to Denver's strange story, it's that recent softness, plus the lack of any real boom over the long term, means that median prices have remained quite attractive compared with those in other destinations. What's more, while retiree markets like Florida, Arizona, and California have turned ice-cold, Denver plods along its sagging but more stable price path. Values sank by a modest 5.5% in the past year.

Don't expect huge discounting on downtown condos, because there was never an overbuilding glut here. Instead, look to nearby adult-focused communities like Heritage Eagle Bend, Heritage Todd Creek, and Anthem Ranch. But "don't tell too many people," says Rinner. "We can only handle so much growth."