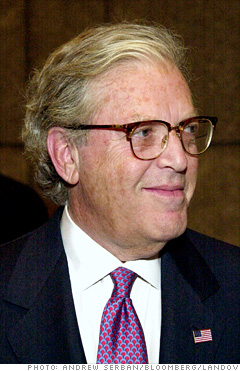 Cayne during happier times as the firm commemorated its new world headquarters in New York City in 2002.
"Acquisitions weren't my forte. The devil you know, that sort of thing. Yeah. I'm not saying I'm right. I was wrong about Neuberger Berman."

Bear Stearns never diversified under Cayne's leadership, despite numerous opportunities. For instance, when Bear had the chance to buy asset manager Neuberger & Berman in 2001 for around $1 billion less than it eventually sold for, Cayne declined. Lehman Brothers then scooped up the respected money manager and its $64 billion of assets under management - now $277 billion - for $2.6 billion in 2003.