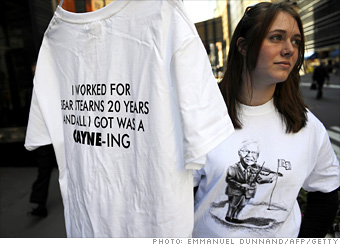 A relative of a former Bear Stearns employee displays a T-shirt mocking Cayne in front of Bear Stearns's headquarters in New York in May.
"This story about smoking marijuana with some woman in a bathroom at a tournament site is pure fiction."

On Nov. 1, 2007, the Wall Street Journal reported, through unnamed sources, that Cayne smoked marijuana at "the end of the day" at bridge tournaments - including once in Memphis in 2004, when a woman smoked a joint in the bathroom with him. He denied it to the paper, and said in a message to all of Bear's 14,000 employees that he had not "engaged in inappropriate conduct." But Cayne's denials made little difference and the incident contributed to his problems with the board, partners, employees and large shareholders.

NEXT: Playing the bankruptcy card