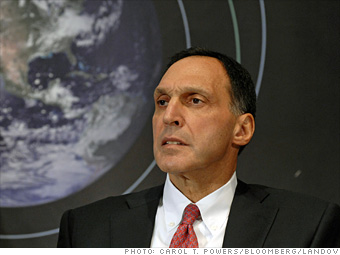 Back in charge: Fuld has reasserted himself after repeated attacks on the brokerage firm's stock, but questions about Lehman's balance sheet linger.
Why he's miserable: Shares have hit new lows repeatedly this year amid fears the company, which gorged on risky mortgage-related debt during the credit boom, will follow Bear Stearns into oblivion. Lehman says it's in good shape, and Fuld duly blames short-sellers for the stock's plunge.

Why others are miserable: In one echo of the Bear Stearns implosion, the free fall in Lehman shares has punished employees, who own some 30% of the stock. And after years of willy-nilly expansion - the firm added 12,000 jobs between 2003 and 2007 - Lehman has shed at least 2,000 jobs over the past year.

What he makes (2007 total compensation, from regulatory filings): $40 million. Fortune recently calculated that Fuld has made $489 million over the past decade cashing in his Lehman stock.

What shareholders have lost since last summer: $26 billion (a decline of 70%)