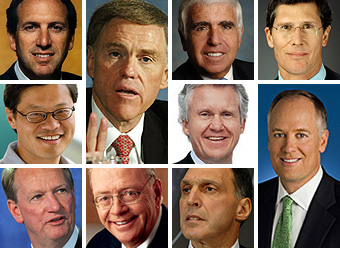 Making ends meet isn't getting any easier. The misery index - the sum of the inflation and unemployment rates - is at a 15-year high, with no relief in sight. Throw in falling house prices, as the PNC household stress index does, and Americans are feeling as strapped as they have since the 1990 recession.

Top executives are generally well insulated from those problems by their multimillion-dollar paychecks, lavish perks and somnolent boards of directors. But don't think for a minute that 2008 has been easy for the CEO set. Ask Angelo Mozilo of Countrywide, Pat Russo of Alcatel-Lucent and Martin Sullivan of AIG, all of whom have been shoved aside as investors tired of their multibillion-dollar missteps.

Who else is feeling the heat? Check out our highly scientific CEO Misery Index, which takes the percentage decline in the company's stock over the past year, then adds a point for each million dollar of reported 2007 compensation. What you get is a list of 10 execs who, if they can't turn around their companies' fortunes, could find 2009 to be a truly miserable year.
By Colin Barr, senior writer