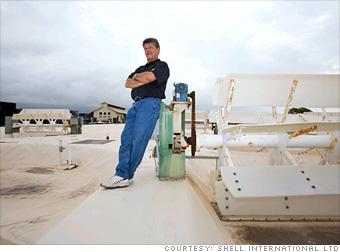 Mark Huntley, chief science and technology officer of Shell joint venture Cellana, stands next to a paddle wheel in a pond that will be used for growing marine algae.
Accountability rank: 10
Accountability score: 61.2
Global 500 2008 rank: 3

When crop-based biofuels such as ethanol began falling out of favor, Royal Dutch Shell, which is headquartered in the Netherlands, shifted gears toward the second generation of biofuels, quadrupling its R&D investments in new sources. One example: Shell partnered last December with a Hawaiian startup to produce a pilot facility for growing marine algae, which it hopes to convert into vegetable oil for use as fuel.

But Shell, No. 6 last year, also faces charges from environmental groups of greenwashing, or using shallow claims of sustainability to cover up eco-unfriendly operations. In August, the World Wildlife Fund UK issued a public complaint about a Shell ad; the oil company touted its investments in renewable energy, but the WWF pointed out that the refinery depicted in the ad did not actually contribute to the cause.