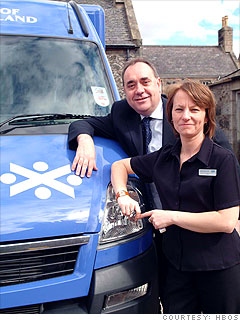 HBOS expects to soon become part of another bank (in September, Lloyds TSB announced plans to purchase the struggling business for $22 billion), but its legacy of corporate responsibility stands apart from its peers.

The company, which jumps from No. 8 last year, was the first major British bank to put carbon labels on financial service products (its Web Saver accounts), and it is working with the Carbon Trust, a government-created business that helps businesses reduce their carbon emissions, to create a mechanism for calculating the greenhouse gas released by computing those accounts.

HBOS has also lent millions to support initiatives such as wind farms, hydroelectric projects, and biomass producers, and finances enough renewable energy to power two million homes. And the bank recently launched a pilot program for "green loans," in which it offsets three tons of carbon dioxide for each loan that's processed.