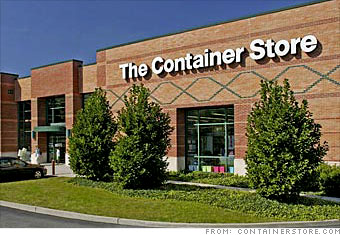 2009 Best Companies rank: 32
While most of the retail sector was hit hard during last year's fourth quarter, Container Store actually saw its November and December earnings increase over 2007 -- although that was the company's hardest in its 30 years. It stuck to expansion plans despite the downturn -- opening four new stores last year, and adding 70 employees to its 4,000-strong workforce. Those staffers get lots of training, too (average is 241 hours per employee per year).

The retailer has avoided layoffs in this economy by freezing salaries and keeping a watchful eye on the balance sheet. Famous for its "open door" communication-driven culture, Container Store asked employees to do all they could to ensure the company's strength during a tough retail climate. A memo to staff from president Melissa Reiff read: "We have to be more responsive, more adaptable and much more efficient with our resources." A contest with cash incentives was held to boost sales.

Paste this link into your favorite RSS desktop reader
See all CNNMoney.com RSS FEEDS (close)
2009 Best Companies to Work For

They're hiring!
As many big companies are announcing mass layoffs, these 20 top employers have at least 350 openings each right now. More