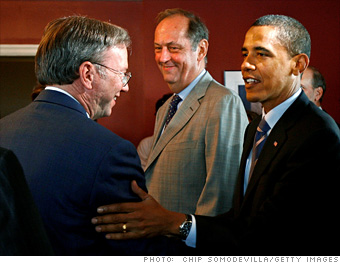 Schmidt (left), former U.S. Senator Bill Bradley, and Obama.
• Obama & Google (a love story)
• 10 things Google has taught us
Candidate Obama starts his presidential bid by focusing on his opposition of the Iraq War, but by the general election, the economy is issue No. 1.