The president may be critical of corporate America, but he has a soft spot for one very big business: Google. Here's how the two got so intertwined. 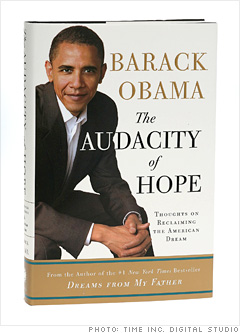 • Obama & Google (a love story)
• 10 things Google has taught us
As a candidate for the U.S. Senate on a fundraising trek across California, Obama stops by the Googleplex for a tour. He later calls the visit the "most memorable part of the trip."

What impressed most? The youthful culture, with employees in their jeans, meetings held over beers, and offices furnished by big rubber exercise balls. Still, it isn't love at first sight.

Obama notices -- and mentions to his hosts -- that of 50 new recruits, "not one was black or Latino," and few are American-born. When he describes the visit in his memoir, "The Audacity of Hope," Obama uses it to explain his plans to expand science education.
By Maha Atal, reporter
NEXT: Nov. 14, 2007: Obama@Google