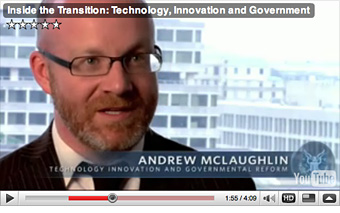 A YouTube video posted on the president-elect's website, Change.gov, introducing members of the technology transition group.
• Obama & Google (a love story)
• 10 things Google has taught us
On election night, Schmidt is among the celebrities -- including Oprah Winfrey -- at Obama's victory rally in Chicago.

Later that week, Schmidt is named an economic adviser to Obama's transition staff, and Obama continues to rely on Googlers during his presidential transition: The president-elect appoints Andrew McLaughlin, who helps Google's Political Action Committee raise over $200,000 for Obama's campaign, to run the President's technology transition group.

Rumors swirl that Schmidt is on deck for a formal role in the administration, but he denies them. Instead, he will later accept a place on the President's Council of Advisors on Science and Technology.