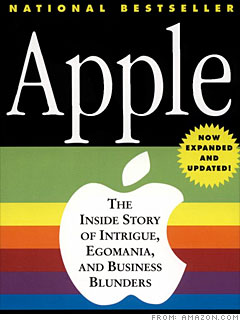 In another book from this era with the resoundingly pessimistic title of Apple: The Inside Story of Intrigue, Egomania, and Business Blunders, Wall Street Journal reporter Jim Carlton covers the Job-less years at Apple. During that period, the company drifted, made uninspired computers and lost market share.

Granted, the book came out in 1997, when many wondered if Apple had much of a future, but Carlton undercuts his generally solid reporting with some thudding prognostication.

From the epilogue: "The bottom line, I feel, is that Apple can't make it on its own." The book's last sentence: "Apple needs a miracle."

NEXT: Creepy Genius - 'The Second Coming of Steve Jobs'