Many writers have produced books that add substantially to our understanding of His Royal Jobsness. They come in three genres that follow his career: Hero, Creep and Creepy Genius. 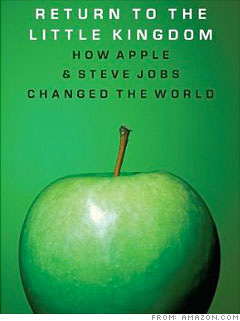 In the early '80s, Jobs gave Time journalist Michael Moritz complete access to virtually every aspect of his life and of Apple, resulting in The Little Kingdom.

Two things emerged from the experience: a fine book, and Jobs' decision to slam the door in the face of most serious journalists who came after. (He has made exceptions, but by some uncanny coincidence they've tended to occur in very close proximity to new product launches.)

Fine as The Little Kingdom is, since its publication in 1984 the Jobs canon has had to weather the passage of 25 years, one exile, an unlikely return, the iPod, the iPhone, suspended glass staircases, and a grave illness.

Perhaps that's why Moritz, now a respected venture capitalist whose Sequoia Capital was a backer of Google, Yahoo, and PayPal, for starters, is re-releasing the book this month with a revamped title, Return to the Little Kingdom.