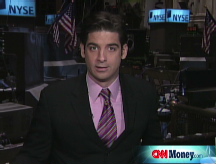 NEW YORK  (CNNMoney.com) -- Stocks appeared set for a volatile open Thursday as investors looked to regain their footing after a heavy day of selling.

At 9:02 a.m. ET, Nasdaq and S&P futures turned lower, with a comparison to fair value suggesting a negative open for Wall Street. Futures had climbed earlier in the morning.

Stocks sank Wednesday, with the blue-chip Dow Jones industrial average briefly falling below 12,000 for the first time in three months during the session.

The Labor Department reported Thursday that the number of people filing for first-time jobless benefits declined by 5,000 last week. But the overall total, 381,000, remains at a level showing the weak economy is straining the labor market.

Other reports due for release after the opening bell include the Philadelphia Federal Reserve index of regional manufacturing activity and the Conference Board's report on leading economic indicators.

Secretary Treasury Henry Paulson is due to speak in Washington at 12:45 p.m. ET. In his speech, Paulson will push for faster changes to the oversight of financial markets that would expand the Fed's role, according to the Wall Street Journal.

Crude for July delivery rose 80 cents to $137.49 a barrel in electronic trading. Shell shut a Nigerian oil field after an attack by a rebel group.

The Government Accountability Office said the Air Force made significant errors in its decision to award one of the largest military contracts in U.S. history to Northrop. While the GAO's report is not binding, it could help Boeing win part or all of the deal.

Hexion Specialty Chemicals said late Wednesday it doesn't think it will be able to go through with its deal to buy Huntsman (HUN, Fortune 500) because of increased debts and lower profits.

Billionaire investor Kirk Kerkorian's Tracinda Corp. has increased its ownership stake in Ford Motor Co. (F, Fortune 500) to 6.49% from 5.5%, according to SEC filing. The firm now owns 140.8 million shares of the automaker.

Job cuts may be in store at Hewlett-Packard (HPQ, Fortune 500). The world's largest technology company plans to reduce its printing and imaging group from five to three business units.

Other markets: In global trade, stocks in Asia snapped a four-session winning streak. European markets were mixed in early trading.

The euro rose against the dollar Thursday. The 15-nation currency bought $1.5566 in European morning trading, up from the $1.5513 in late New York trading on Wednesday.